The Koreas and the Mainstream Media

The Koreas and the Mainstream Media 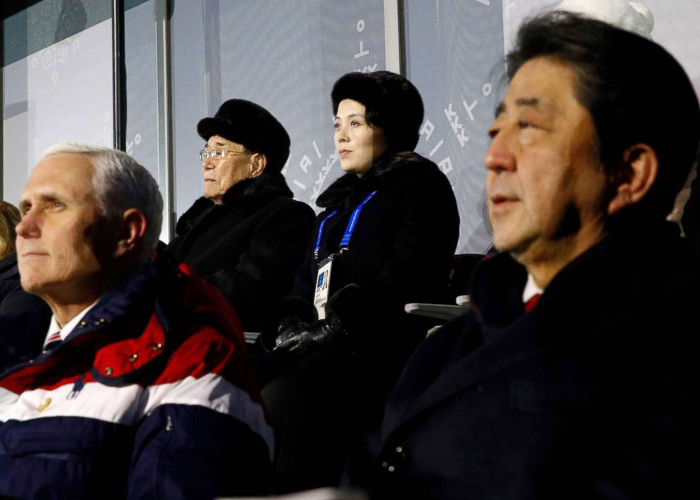 As a voluntaryist/libertarian, I never thought I’d sit down at the keyboard to write about the Winter Olympics. Not the games, but about the politics that inevitably rears its ugly head whenever you get a group of people together to compete in activities that, in the end, are mindless entertainment for the masses. All of the flags. The endless stories of years of preparation. The nations.

Politically, the biggest news surrounding this event was that north and south Korea would march in the opening ceremonies together, and that their women’s hockey teams would combine forces. Many, including myself, saw this as an occasion for the two countries to enter into some form of talks to end the 65-year tension between estranged brothers. I told a friend that the best thing the United States could do was to leave them be. Looking from the outside, it appears the siblings will be allowed to talk.

It is customary that countries send a delegate to the games. Kim Jong Un chose his sister, Kim Yo Jong, to represent north Korea at these games. At the opening ceremonies, she was seated near Vice President Mike Pence, who was there as the ambassador for the United States. The two were never seen to speak, shake hands, or make eye contact. The American press saw this as her “throwing shade” at the man. Knowing that the mainstream press in this country hates Trump, Pence, and anything to do with this administration, they began to fawn over her.

Before I describe the “swooning” that the talking heads engaged in, let’s take a look at the sister of one of the most notorious dictators on earth. Yo Hong is the deputy director for the “Propaganda and Agitation Department” of a country the keeps up to 300,000 of its own citizens in “concentration camps.” Her family runs these gulags. She is a member of the politburo of the nation’s supremely powerful “Worker’s Party.”

It is obvious that, besides being a “pretty face” they can parade for the cameras, she is active in the nation’s brutal affairs for a regime that frequently performs public executions of its people. One that has actually sent a reported 50,000 citizens as slave labor to countries such as Angola, China, Kuwait and Russia. The athletes that are currently representing the nation in the Olympic Games know that if they attempt to defect, their families at home will be massacred or sent to the camps. I could continue, but it would be overkill at this point. I assume most that are reading this have some knowledge of the brutality inflicted by north Korea.

Knowing that Yo Hong is an active participant in the misery of millions of her own people, let’s look at how some in the U.S. press have reacted to her, all because she is seen to be hostile to an administration they despise. CNN ran with the headline, “Kim Jong Un’s sister is stealing the show at the Winter Olympics.” They spoke of her smile, handshake and “warm message” written in south Korea’s presidential guest book. Clumsily comparing her to Ivanka Trump, the news outlet appeared to imply that with her good looks, she is the polar opposite of her brother and that she was sent to be the diplomatic face of the dictatorial regime. The Washington Post headline read, “The Ivanka Trump of north Korea captivates the south.” Referring to her as a “political princess,” they marveled that she wore a plain black outfit and that her purse was not a name brand.

Forgive me if it appears that I am only criticizing the liberal media. The reaction from the other side of the aisle isn’t helping. Not to be outdone or ignored, the “right” side reacted to the progressive media the way it always does. Instead of taking the high road, suggesting the left knock it off and see where this diplomacy takes itself, some decided to attack north Korea. Marc Thiessen, Washington Post columnist and Fox News contributor, posted a picture of the Koreas at night, an image that has become famous due to it showing the south lit up like a Christmas tree and the north in darkness. He attacked what he called the north’s “charm offensive,” reminding people of northern conditions.

Whatever the intentions the Kims may have in sending their team to the Olympics as a unified Korea, the fact that it can lead to southern influence, mainly liberty-minded discussions, suggests the talking heads would do well to step aside and allow the kinsman to converse.

As a reaction to both sides spitting fire, social media immediately blew up. People responded to the press’ articles by posting pictures of signs that read, “Justice for Otto” (referring to American college student Otto Warmbier who was arrested for stealing a poster in a Pyongyang hotel; Warmbier would be released but shortly after die from treatment he received at the hands of the regime). Memes showing CNN choosing a “gulag queen” over “dignity” quickly followed. Michael Malice, author of Dear Reader – The Unauthorized Autobiography of Kim Jong Il, and an expert on north Korean history tweeted: “Russian collusion is treason, north Korean collusion is journalism.” Although I may agree with all of it, none of this is helpful in the peace process if one is to be started. It is always kindled by the media and their partisanship.

However people in the press feel about this administration, or about the situation with the Koreas, one would hope they would be able to think rationally and do their job. One can only believe that raw hatred has replaced clear thinking, “seeing red” has clouded judgment, and one day they will be able to look back at the mockery they’ve made of their profession and repent of the sin of partisan, hack journalism.

When a voluntaryist/libertarian/anarchist such as myself — one that is accused of being unreasonable for those beliefs — can see the damage being done by the mainstream’s biased reporting, it is time that the public look into alternative outlets for their news gathering.