The War In Afghanistan – Will Trump Finally End It?

The War In Afghanistan – Will Trump Finally End It? 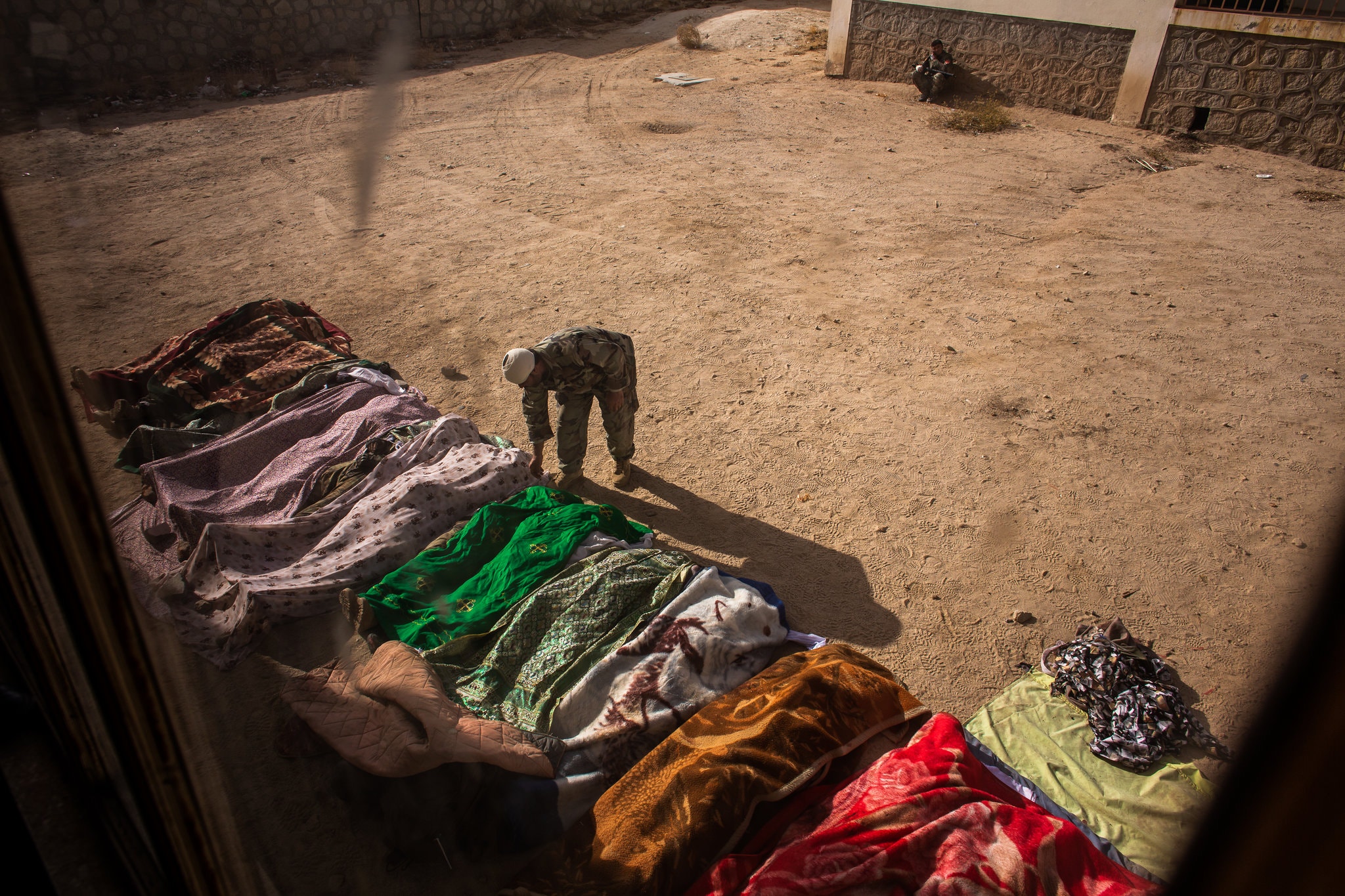 The bodies of 20 commandos were lined up last year outside the governor’s office in Sang-e-Masha, in Afghanistan’s Ghazni Province. Their company was almost destroyed fighting the Taliban.CreditJim Huylebroek for The New York Times

Rod Nordland and David Zucchino in The New York Times review the current state of Afghanistan’s military. Their assessment is that the Afghan government forces are good at getting killed by Taliban fighters. It has gotten so bad that the government doesn’t even put out a casualty report anymore.

The ministry reports do not mention government casualties. After May 2017, the Afghan military stopped releasing its casualty figures. The information has since been treated as classified by the United States military at the Afghans’ request.

The regular Afghan army is mainly being used to guard outposts and check points while Afghan special forces commandos backed by US special operations and US air power are doing the offensive fighting.

“The weight of the Afghan war is mostly on the shoulders of commandos and the air force — they are doing all the offensive operations,” said Gharzai Khowakhozhai, a former army general and a military analyst in Kabul, the capital. “Regular forces are not doing their job properly.”

Those who want us to stay in Afghanistan like General David Petraeus believe that if we leave the Taliban will overthrow the government and reimpose “medieval rule”. In an article published in The Wall Street Journal (behind a paywall), he argues that pulling out of Afghanistan means President Trump will be making the “same mistake the Obama administration did in Iraq”.

“The US withdrawal that was inadvisable in Iraq eight years ago would be indefensible for Afghanistan today.  As an alternative, Mr. Petraeus, suggests that it should be recognized that the US doesn’t need a plan for leaving but a strategy for staying—one that carefully minimizes American, coalition and Afghan costs and casualties but accepts the necessity of a sustained and sustainable troop presence to safeguard vital US interests.”

In other words – forever occupation of a foreign country. I don’t believe Petraeus has much influence over President Trump, but he does have a constituency among military top brass and hawkish politicians. Predictable war hawk Senator Lindsey Graham has warned Trump that any deal must be vetted by congress and that:

“Any agreement which denies the US the ability to have a meaningful counter-terrorism force capability – based on conditions on the ground for as long as needed – is a recipe for disaster,” Mr. Graham said.  Instead it is paving the way for another attack on the American homeland and attacks against American interests around the world.”

Afghan politicians such as Gulbuddin Hekmatyar also share Petraeus’ concern that the Afghan government is too “weak and will collapse when the US leaves“.

But Trump seems determined to end the war and pull the troops out. He met Friday (Aug 16, 2019) with his cabinet to discuss the US-Taliban peace plan. Prior to the meeting CNN reported that:

“US President Donald Trump is expected to meet with his top national security advisers on Friday to review a US-Taliban peace plan that could end America’s longest war in Afghanistan, CNN reported.

Trump is expected to meet at his Bedminster golf resort with Secretary of State Mike Pompeo and national security adviser John Bolton, according to two sources familiar with the planning, CNN added in the report.

CNN quotes several defense officials saying that US Secretary of Defense Mark Esper and Chairman of the Joint Chiefs of Staff General Joseph Dunford are expected to be present.

CNN also quotes other sources saying that the major topic will be Afghanistan and the plan that US chief negotiator, Zalmay Khalilzad, has been working on for months to end the conflict in Afghanistan.

Sources quoted by CNN say that the peace plan is expected to formalize a significant withdrawal of US forces from Afghanistan — from about 15,000 troops to 8,000 or 9,000 troops — and enshrine official commitments by the Taliban to counterterrorism efforts in Afghanistan.”

After the meeting, the White House put out a press release and President Trump posted a tweet that basically said the meeting went well.

“Discussions centered around our ongoing negotiations and eventual peace and reconciliation agreement with the Taliban and the government of Afghanistan. The meeting went very well, and negotiations are proceeding,” deputy press secretary Hogan Gidley said in a statement.

Trump added on Twitter: “Just completed a very good meeting on Afghanistan. Many on the opposite side of this 19 year war, and us, are looking to make a deal — if possible!”

It does appear that Trump wants a deal to get the majority of US troops out of Afghanistan. He should remove them all, but their will be pressure on him to leave some troops in the country and he usually caves to the military when pressed. The problem for the US is the Taliban may not cooperate. They have stressed that they want US and NATO troops to completely withdraw and that the main obstacle to peace is the “illegitimate” occupation by foreign forces. However, their is reason for optimism that we are finally going to end our part in the longest war in U.S. history.