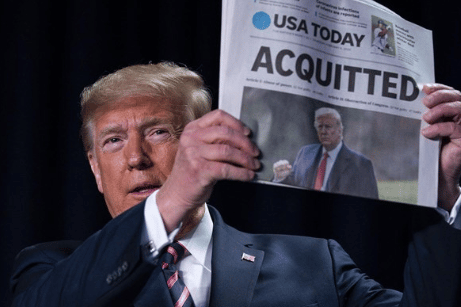 Ukrainian officials are clearly looking to flex their muscles in the wake of being the foreign policy centerpiece of the Trump impeachment, accusing the US of holding up another $30 million worth of standard arms sales for an unknown reason. This sale is distinct from the issue in the impeachment, and only has in common the countries involved.

During impeachment, US officials were hyping the vital importance of Ukraine to US policies, particularly to the policy of hostility toward Russia. That not being sufficiently pro-Ukraine was being presented as an impeachable offense has clearly gone to Ukraine’s head, however.

A $30 million commercial sale of arms is hardly the sort of thing officials get particularly vocal about. Three current Ukrainian officials were describing the matter to the press, however, and a former US official concurred on the matter. Ukraine made a down-payment on the arms, but they haven’t finalized the sale yet.

As a practical matter, President Trump has yet to approve the sales, officials are still not clear why, and Ukrainian officials are very keen to get a refund for the down payment, as one US official said they’d probably be better off buying from someone else.

What’s really going on, however, is that Ukraine is trying to parlay their newfound importance into some beneficial resolution. They are likely particularly interested in presenting a “held” sale as tantamount to frozen aid, and again the sort of slight against Ukraine that could become a vital US policy issue, even if it is just a small matter over minor arms sales.

How sustainable this is for Ukraine is anyone’s guess, but the sense of entitlement and of indispensability in anti-Russia policy could evaporate in an instant, and it’s hardly unusual for the US to change its mind who they really “need” in a long-term policy effort.