Veterans Day: The Forgotten History of America’s Veterans Day and What It Commemorates

Veterans Day: The Forgotten History of America’s Veterans Day and What It Commemorates 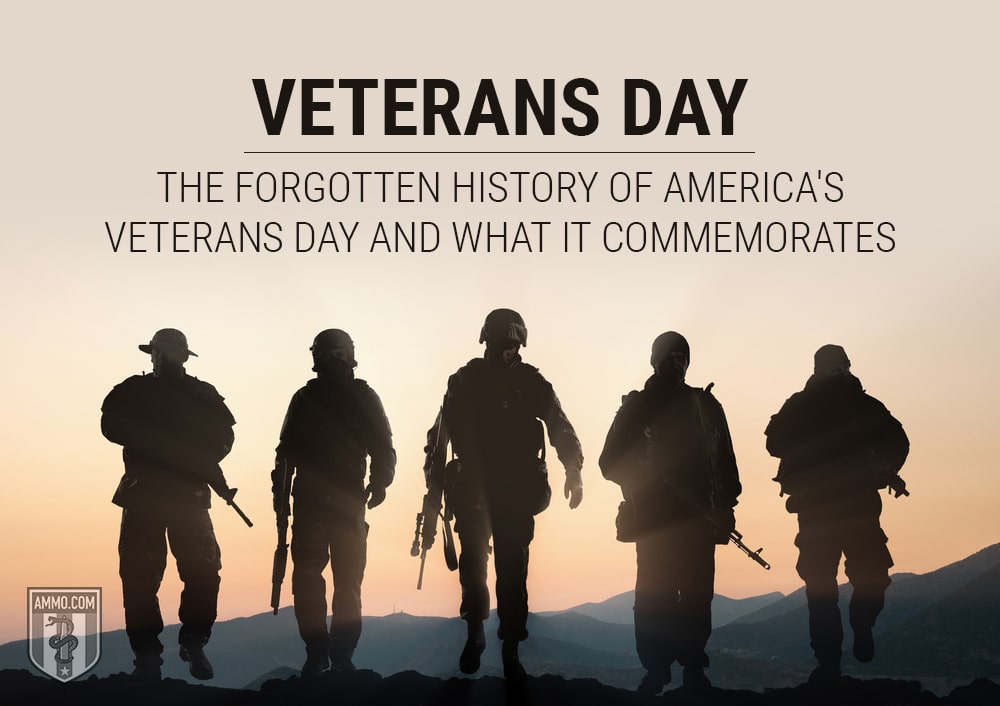 Veterans Day, celebrated each year on November 11th, was first celebrated on this same date in 1919, under the name of Armistice Day. The holiday was named in remembrance of the temporary ceasefire that brought about the unofficial end to World War I when, the year before, the Allied forces entered into an armistice with the Germans, stopping live battle on the 11th hour of the 11th day of the 11th month of 1918.

A year later, and nearly five months after the official end of the First World War (which occurred on June 28, 1918, with the Treaty of Versailles), President Woodrow Wilson proclaimed November 11th the first commemoration with the following:

“To us in America, the reflections of Armistice Day will be filled with solemn pride in the heroism of those who died in the country’s service and with the gratitude for the victory, both because of the thing from which it has freed us and because of the opportunity it has given America to show her sympathy with peace and justice in the councils of the nations…”

He called for parades and public gatherings and a brief moment of silence at 11a.m. Two years later, on November 11, 1921, an unidentified American soldier was buried at Arlington National Cemetery in what became known as the Tomb of the Unknown Soldier.

It wasn’t just the United States that remembered the end of the great war; countries around the world celebrated Armistice Day in 1919, and many still do today. In Canada, they call it Remembrance Day, and Great Britain celebrates Remembrance Sunday on the second Sunday of each November.

In 1926, a Congressional resolution was passed, making Armistice Day a recurring federal holiday, stating that it should be “commemorated with thanksgiving and prayer and exercises designed to perpetuate peace through good will and mutual understanding between nations.” As a side note, the federal government can’t force the states into celebrating a holiday, as it’s not within its jurisdiction, but most states adopt the federal holiday calendar.

Although the ceasefire – believed to have occurred on the 11th hour of the 11th day of the 11th month of 1918 – was the end of the war to end all wars, history has shown the naivete of the era.

Perhaps the Allied forces showed too much sympathy with the Treaty of Versailles. By the time the war-ending document was signed, seven months after the armistice in November, much of the Allied troops had returned home. And no one, not the United States nor Britain nor France, wanted to remain in Germany or Austria to make sure the terms of the treaty were enforced. What’s more, the Treaty did not require an unconditional surrender; the German troops, although defeated, were not disbanded.

As the embittered Marshal Ferdinand Foch of France, supreme commander of the Allied forces, presciently concluded of the Versailles settlement: “This is not peace. It is an armistice for 20 years.”

Foch was right. Twenty years after the 1919 settlement, the German army under Hitler – himself a decorated veteran of World War I who helped to spin the yarn that the German army hadn’t been defeated in the field, but instead betrayed by the Jews at home – invaded Poland to start World War II, which would cost the world roughly four times as many lives as World War I.

This time, over 16 million American soldiers, a whopping 42 percent of war-aged men, headed out to battle. And while we lost over 400,000 to the war, many of those men and women returned home. Shortly thereafter, tension began to rise in Korea, and by 1950, the Korean War began. Another 1.8 million troops were again sent across the sea.

By the end of the summer of 1953, after the Korean War ended, about one in every two service-age men were veterans and it was decided that Armistice Day would be officially be changed to Veterans Day – honoring all veterans from all wars.

Throughout the years, Veterans Day has changed, sometimes to its benefit and sometimes not. For instance, in 1968, the federal holiday – along with Memorial Day, George Washington’s birthday, and Columbus Day – was switched to a Monday celebration to help encourage travel and tourism in the country.

A few years later, in the brief period from 1971 to 1975, the date was changed again. Instead of the Monday closest to the original Armistice Day, the government opted to set Veterans Day as the fourth Monday in October.

This change wasn’t joyfully accepted by the American public, as many held emotional ties to the origins of Veterans Day. After a few years, the date was reverted back to November 11th.

Different areas celebrate Veterans Day in different ways. Most public schools close (normally on the Monday closest to the holiday), as do all federal buildings, most banks, and many businesses. There are parades and celebrations to honor veterans. Perhaps the most iconic is the annual wreath laying ceremony that happens at the Tomb of the Unknown Soldier.

Many areas still observe a moment of silence at 11a.m. to remember all veterans, those that are still here, those that have gone on, and those that never made it home. It’s also not uncommon to see the American flag flown at half mast.

Regardless of political leanings, Veterans Day is about recognizing the dedication and sacrifice of America’s veterans. If you want to show support, attend a parade. Volunteer at your local VFW. Visit a VA hospital and spend some time talking to the men and women who are unable to attend such events. And when you see a vet, shake their hand, and thank them for their service.

Veterans Day: The Forgotten History of America’s Veterans Day and What It Commemorates originally appeared in the Resistance Library at Ammo.com.