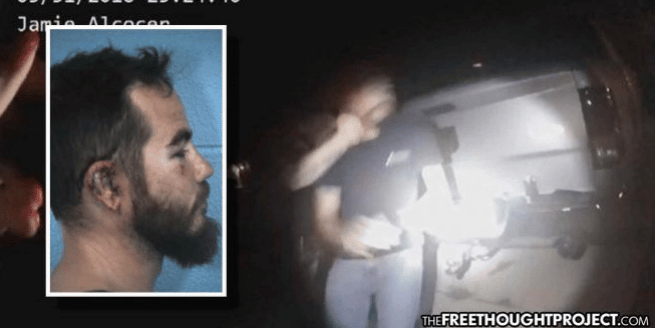 Austin, TX — In case after infuriating case, the Free Thought Project has reported on instances of horrifying rights violations all stemming from a police officer claiming to smell a plant. We have seen both women and men sodomized and raped — often times in public — as cops search for this smell. We have seen entire families held hostage, women and children beaten up, rampant sexual assault, and all of it stemming from a plant smell. The following incident is one of those cases and the taxpayers are about to pay dearly for it.

In May of 2018, two Hutto police officers Jamie Alcocer and Gregory Parris responded to a neighborhood snitch who called 911 to report the smell of marijuana. The officers both admitted on their body cameras that they had no idea where or which house the smell was coming from. But, hell bent on kidnapping and caging someone for daring to partake in a plant, they walked the neighborhood to find it.

“One of the neighbors is calling, snitching,” Hutto Police Officer Gregory Parris is captured saying on his body camera video. Parris admitted in the recording he “had no idea” which house was the suspected source because the complaining neighbor didn’t “know the exact address,” Parris said in the video, according to KXAN.

After walking for a while and not finding the culprit, the two cops came upon an innocent man who was watching a ball game at a friend’s house. Jeremy Rogers was on private property and had committed no crime when the two officers approached him. As the body camera shows, Rogers is cordial and greets the officers. But less than 30 seconds later, he would be shoved against the back of a truck and facing down an insanely violent police officer.

As the video shows, Rogers told the officer that he would call his friend from inside to verify that they were not smoking weed and were simply hanging out. But Parris just knew he had nabbed himself a criminal pothead and wanted nothing of it.

“No, don’t call him yet. Put your phone down, put your hands up on the truck real fast.”

Rogers replied, “For what?”

“Because I’m telling you to,” the officer said.

“What did I do wrong?” Rogers asks.

“Dude, don’t do that, put your hands up on the truck, man,” says Parris.

“Drinking in public,” Alcocer says, making up a false charge to justify their attack. Rogers was on private property which means their bogus claims of drinking in public were false.

“I’m drinking in the driveway, not in public,” Rogers answers back.

The cops then falsely claimed to smell weed on Rogers’ shirts.

“You smell like weed right now, man … I can smell it on your shirt,” Parris said. But there was no such weed smell.

The officer demanded Rogers give him his ID at which point, Rogers said he didn’t have any.

“Give me your wallet,” Parris replies.

“Do you have probable cause?” Rogers correctly asks.

“Yeah, how about you going to jail right now for public intoxication?” Parris says, again making up charges under the color of law.

“For what? I didn’t step out of the boundaries” Rogers says, before the officers move to kidnap him.

When Rogers challenged the officer about being drunk in public, all hell broke loose and the officer would begin punching the innocent man, slamming his face into the back of the truck in the process.

According to the lawsuit, Rogers pushed away in self-defense as the cop had begun an unprovoked attack on the innocent man over the false claim of smelling weed.

Parris would then slam Rogers to the ground where he would punch him again and taser him.

At no time did either officer tell Rogers he was under arrest.

What’s more, despite the fact that Parris would claim Rogers resisted and assaulted him, officer Alcocer’s body camera never shows Alcocer intervening during the arrest. This was also in spite of the officer radioing into dispatch that he “had one fighting.”

The force throwing Rogers to the ground was so great that his ear would nearly be torn from his head. According to the lawsuit, this has caused him permanent pain and twitching and issues with vision loss.

As Rogers was being brought to the hospital, Parris can be heard on the body camera gloating about his attack, saying, “I got to admit that’s a nice right hook though.”

After the unlawful attack and kidnapping, Parris would charge Rogers with public intoxication, felony assault on an officer and resisting arrest charges. Rogers, who has no criminal background was facing the real possibility of spending years in prison all over fake charges by a corrupt cop.

Luckily, all of these false charges would be dropped months later after the Texas Rangers investigated the case. Also, for his role in this attack, Parris would be arrested and charged with one count of assault with bodily injury and one count of official oppression. He has been on paid vacation since his indictment in May.

As TFTP reported in August, the violence associated with cops claiming to smell weed has gotten so out of hand that one top court in Maryland is doing something about it. The court ruled that police are not justified in searching a person based solely off of the smell of marijuana.

This ruling is a major boon for freedom and will only serve to improve police and citizen interactions by removing one of the ways police can harass individuals. Hopefully it will spread to other states like Texas where tyrant cops like Parris smash in people’s heads for the smell.

As TFTP reported in June, an infuriating video was shared with the Free Thought Project showing North Carolina cops violate the rights of multiple innocent people because one of them smelled marijuana. No marijuana was found, but that didn’t stop cops from holding a family and their guests hostage for over an hour to look for it.

Just last month, TFTP reported on another case in which Chanel Bates, 26, was leaving a restaurant when she was targeted by police who claimed they smelled marijuana. The officers’ olfactory intuition was then used as the justification to detain, savagely beat, and kidnap the entirely innocent woman who had caused harm to no one. The infuriating and disturbing scene was captured on video.

In the land of the free, cops will claim to smell a plant on you and use that claim to violate your body in the most horrific way. And some people still have the audacity to call this “justice.” Luckily, as this ruling in Maryland highlights, these people are becoming fewer by the minute.

Republished from the Free Thought Project.