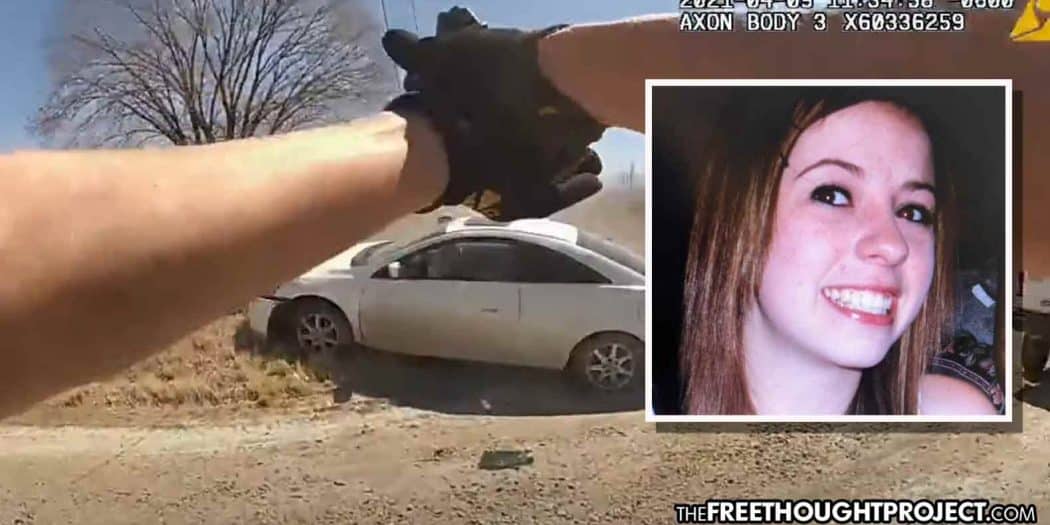 On a regular basis, the Free Thought Project reports on instances in which police officers deliberately jump in front of moving vehicles, or claim to be in danger of being hit by a vehicle, in order to justify the execution of the driver. Over the years, we have reported on countless cases of unarmed motorists being executed by police for doing nothing other than fleeing. Cops are rarely charged in these instances because they claim the vehicle “made them fear for their life.”

A 26-year-old young woman is now dead because an officer did this exact thing—he jumped in front of a moving car only to kill the woman as she tried to drive away. The parents of Paige Pierce are now planning to sue Delta County over the death of their daughter.

A lawsuit is their only means of seeking justice now that Delta County District Attorney Seth Ryan announced they will not file criminal charges against the Delta County sheriff’s deputy who slaughtered their daughter following a car chase in April.

“Based on the evidence, the people cannot disprove that Davis was acting in self-defense and the district attorney’s office cannot file charges against Deputy Nolan Davis,” Ryan said.

But is shooting a moving car defense against anything? When has a bullet stopped a car from moving forward? There is no logical basis for this defense claim as the only means of self-defense involving a moving car — is getting out of the way. This cop did the opposite at first and then only shot after he got out of the way.

According to police, the incident unfolded around 11:30 a.m. on April 9 when police attempted to pull over Pierce for driving without a license plate on her vehicle. For some reason, which we will never know now that she’s dead, Pierce did not stop.

After police threw down a spike strip, with two flat tires, Pierce turned down a dirt road in a futile attempt to flee. 9 News reports:

Davis pulled in after her and, a few seconds later, got out of his patrol car. According to Davis, he “thought Paige may have slowed down at the back of the circle drive looking for a way out and possibly stopping to flee on foot.”

In fact, Pierce was still in her car. Davis’ body camera video shows him just outside his patrol car and Pierce trying to drive through a narrow stretch of the driveway between Davis, his car and a parked pickup truck. The video then shows Davis firing his gun as Pierce’s car passes by.

After executing Pierce, her car swerves off the road into an embankment as it continues revving up. Forensics would determine that Pierce was hit by three of the trigger happy cop’s bullets, including once in the head. She died at the scene.

Following the shooting, Davis can be heard saying, “It was about to hit me. I had no choice, Sarge.” But as the video below shows, this is clearly not true.

“He shoots her as she’s going by, he’s all ready to shoot her as he’s getting out of his truck. The majority of his shots are as she’s already past him,” Ellie Anders said, telling reporters that she is devastated at the lack of charges for the deputy.

Anders’ attorney, Kevin Mehr agrees, and pointed out the obvious facts—deputy Davis had plenty of time to move and deadly force was completely unnecessary.

“The video I think speaks for itself, that he’s got time to close the car door, draw his gun, step three steps back and he’s already out of the way,” Mehr said.

The department announced this week that Davis’ administrative leave is over and he is now back on full duty. Unarmed women beware.