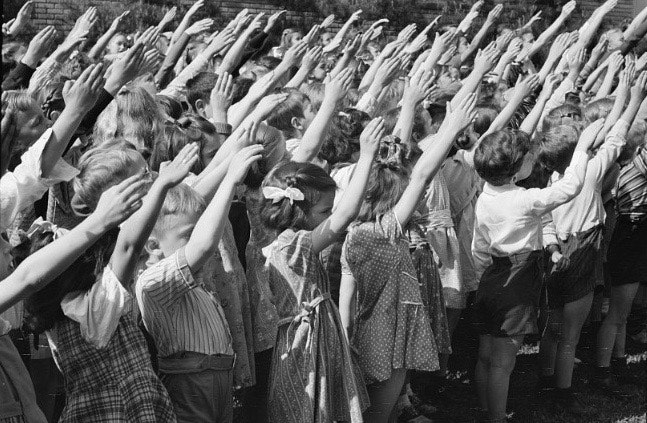 Flag Day is upon us, with the Fourth of July not far behind. No better time for a frontal assault on a cherished American ritual—the Pledge of Allegiance.

Though conservatives will be most aghast at this undertaking, the open-minded ones will soon discover they should be among the pledge’s greatest critics.

Before I open fire, a brief explanation for international readers: The Pledge of Allegiance is recited by children across America at the start of start of each school day. It’s also incorporated into many meetings held by federal, state and local governments and private groups as well.

Standing and facing the flag with hand over heart, one recites: “I pledge allegiance to the flag of the United States of America, and to the republic for which it stands, one nation under God, indivisible, with liberty and justice for all.”

A Government Loyalty Oath Written by a Socialist

Many who consider the pledge a cornerstone of conservative values will be surprised to learn it was written by a Christian Socialist named Francis Bellamy, who was run out of his pulpit at a Boston church for preaching against capitalism, and who called Jesus Christ a socialist.

His radical cousin, Edward Bellamy, wrote a popular novel, Looking Backward, which glowingly describes a future in which government controls the means of production and where men are conscripted into the country’s “industrial army” and compelled to work in roles assigned to them by central planners.

While working for The Youth’s Companion, a children’s magazine, Bellamy wrote the Pledge of Allegiance in 1892, timed to be introduced in patriotic celebrations accompanying the 400th anniversary of Columbus’s arrival.

According to a summary of Bellamy’s account of his writing of the pledge, he aimed for brevity, as well as “a rhythmic roll of sound so they would impress the children and have a lasting meaning when they became grown-up citizens.”

Given his beliefs, Bellamy was well-suited for creating a loyalty oath that conditions Americans to subordinate themselves to a powerful central government. Make no mistake—in pledging allegiance “to the republic,” Americans are doing precisely that.

That’s consistent with Bellamy’s wish for state sovereignty and individual liberties to yield to a centralized national government, but it’s starkly at odds with the founding spirit of the country.

Free people have no business pledging loyalty to any government. It’s government that has a duty of loyalty to the people, with no more essential demonstration of that loyalty than the protection of the rights of individuals.

Bellamy didn’t just write the pledge, but also instructions for an accompanying ritual that feels simultaneously religious and militaristic:

“At a signal from the Principal the pupils, in ordered ranks, hands to the side, face the Flag. Another signal is given; every pupil gives the Flag the military salute—right hand lifted, palm downward, to a line with the forehead and close to it… At the words, ‘to my Flag,’ the right hand is extended gracefully, palm upward, towards the Flag, and remains in this gesture till the end of the affirmation; whereupon all hands immediately drop to the side.”

Yes, Bellamy directed civilian children and adults to render a military salute to the flag, perhaps laying the philosophical groundwork for the eventual creation of the socialist “industrial army” his cousin envisioned in his novel.

The arm outstretched toward the flag came to be called the “Bellamy salute,” and it endured for several decades before its striking similarity to the Nazi salute prompted its replacement in 1942 by the familiar hand-over-heart gesture.

I haven’t always felt this way. Conditioned by 13 years of public school, I continued sincerely reciting the pledge at various functions far into my adult life. Following my U.S. Army service, I’d even stand at attention with heels locked—Bellamy would’ve been proud.

It was only after learning the true meaning of liberty and the animating spirit of our system of government that my mind was changed. If your experience is like mine, once you begin recognizing the pledge as the authoritarian loyalty oath that it is, you’ll soon develop disdain for its nearly every phrase.

Two elements of the pledge are especially destructive of a healthy mindset regarding the relationship between the American people and government: “One nation” and “indivisible.”

First, in creating the United States of America, the founders were not forming a single nation. The U.S. Constitution is a compact of independent states, with the word “states” taking its highest political meaning that puts Virginia, for example, on par with France.

That compact delegated certain, limited powers to a federal government so it could perform stated functions in service to the separate states. As James Madison wrote, “The powers delegated by the proposed Constitution to the federal government are few and defined. Those which are to remain in the state governments are numerous and indefinite.”

Fifty different sovereign societies exercising numerous and indefinite powers, without regard to the federal government and, whenever necessary, in outright defiance of it. That’s the United States of America.

With each “one nation” incantation, however, American children and adults are conditioned to view their states as insignificant political subdivisions, while embracing the primacy of the federal government and the centralization of power in Washington, DC.

However, of the pledge’s 31 words, “indivisible” should give greatest offense to American patriots. The very existence of the United States—created by secession from the British empire—is a testament to political divisibility as a foundational human right.

The Declaration of Independence explicitly expresses that sentiment:

“Governments are instituted among men, deriving their just powers from the consent of the governed—that whenever any form of government becomes destructive of these ends, it is the right of the people to alter or to abolish it, and to institute new government, laying its foundation on such principles and organizing its powers in such form, as to them shall seem most likely to effect their safety and happiness.”

By reciting the Pledge of Allegiance and proclaiming the United States of America “indivisible,” Americans disclaim their human right of self-determination. They also surrender their ultimate means of holding government accountable: Every government should exist under perpetual threat of disintegration.

Scouring the pledge for positives, one can appreciate that Bellamy rightly referred to the government as a republic and not a democracy—an important yet underappreciated distinction.

Likewise, we can all embrace the idea of “liberty and justice for all.” However, the pledge implies that’s the current state of affairs, rather than a far-off ambition.

That ambition is undermined by the powerful central government advanced by Bellamy’s pledge. Today, it faces a potent new threat from those who, pursuing “equity,” seek to undermine the rights of individuals by imposing new forms of government-sanctioned discrimination.

Civics aside, it’s worth noting that, since its introduction, the pledge has also sparked objections on religious grounds—and I’m not referring to the 1954 addition of the words “under God,” and its attendant controversy about the separation of church and state.

Rather, many religious people reasonably view pledging allegiance to a flag as a form of idolatry, or something uncomfortably close to it. Before you scoff at the idea that the U.S. flag has evolved into a “graven image” in the Second Commandment sense, consider that citizens are encouraged to dispose of worn-out flags by burning them and, after a period of silent reflection, burying the ashes.

Other religious individuals are put off by the idea of swearing faith to a government. One such critic quotes the Christian bible’s Matthew 6:24: “No one can serve two masters.” You don’t have to ponder that long to see many profound conflicts between the bible’s values (e.g., “blessed are the peacemakers,” “thou shalt not steal”) and the U.S. government’s.

No matter where the hand is placed in what Gene Healy rightly calls a “slavish ritual of devotion to the state,” it’s safe to say if the Pledge of Allegiance had never existed, and Americans were to observe a similar rite in another country, most would surely recoil at the authoritarian spectacle.

Alas, there could be no such opportunity: Richard Ellis, author of To the Flag: The Unlikely History of the Pledge of Allegiance, looked but couldn’t find another country that has anything like it.

Created by a socialist and now fiercely championed by those who think they’re conservatives, the Pledge of Allegiance will likely continue warping Americans’ thoughts about the relationship between citizens and government for many more years to come.