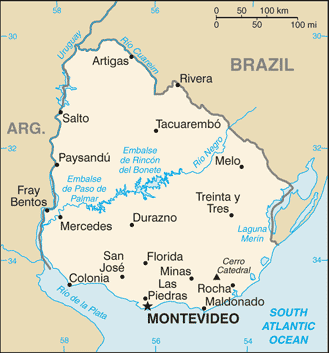 We are not talking enough about Uruguay. That small South American country boasts impressive results in its handling of the coronavirus. It is also signaling that it wants to prosper and that it understands more freedom might be the way to go about it.

Under President Luis Lacalle Pou, Uruguay has suffered a very low number of deaths from coronavirus (23 as of June 15) and the number of confirmed cases (848) is small. At no point did the government decree a national quarantine, preferring instead to let individual responsibility, guided by accurate and transparent information that originated from a team of scientists and experts, do the trick.

Rather than shut down the economy (80 percent of it kept going) and send the police or the military to arrest people, as was done in some other countries, the authorities, in coordination with civil society, put an emphasis on testing (proportionally, they are only behind South Korea in the number of tests as a percentage of confirmed cases) and briefly isolating those who had Covid-19. The external borders were shut, but the internal borders were kept open.

Read the rest of this article the Independent Institute.

The Return of Protectionism

There are different ways to gauge the rise of protectionism. An obvious one is to count, as Global Trade Alert does, the number of measures adopted by various countries affecting competition from outside. Some 4,000 new barriers to trade have been adopted worldwide since 2008.

Another way is to look at the trend in political discourse in developed countries—and the response of the electorate. The effect that Bernie Sanders has had on Hillary Clinton’s views on trade in the current U.S. presidential campaign, and the fact that the most protectionist candidate, Donald Trump, obtained some fourteen million votes and 45 percent of the popular vote in the Republican primaries, tell us much about the shifting views on trade. Not to speak of the strength of the anti-globalizers in Europe, from Podemos, Syriza, and the 5-Star Movement in the south to the National Front in France, the People’s Party in Switzerland, and the True Finns in the north.

Read the rest at The Beacon here.

US News MIT and Harvard file a lawsuit against a Trump decision to bar foreign students from remaining in the US if they are only taking online classes. [Link] The California prison system moved prisoners with coronavirus to the San Quentin Prison. A third of the...

Glenn Greenwald On The Coalition Of Pro-War Democrats And Republicans

Glenn Greenwald at The Intercept: How The Armed Services Committee, In The Middle Of A Pandemic, Approved A Huge Military Budget And More War In Afghanistan. For anyone that needs a reminder of what Democrats (and some Republicans) were saying about V.P. Dick Cheney...

NYT: ‘Was the intelligence tweaked by people seeking to hinder efforts to withdraw American troops?’

Can you believe these idiots? After two weeks of propaganda from their paper: "Other questions abound: When did the reported payments begin? Were they payback for American support of Afghan militants against Soviet troops there in the 1980s, or something else? Were...

Judge: Cops Can Murder You If They Feel Like It

In the topsy-turvy world we live in, this otherwise unremarkable letter calling for respect for free speech, published in Harper's and signed by 153 writers, etc., has set off a nasty firestorm of statist-left criticism. It seems that some people are so insecure about...

The indictment here She is accused of: Conspiracy to have sex with minors Trafficking in minors for sexual activity Perjury But, will we ever find out who the "others" are? Maxwell is being held under federal protection: LITTLE ROCK, Ark. (AP) — Federal officials were...

7/6/20 Ramzy Baroud on the Steady Annexation of Palestine

Scott interviews Ramzy Baroud about the Israeli annexation of Palestine, including Trump's role as perhaps the most acquiescent president in American history in going along with the agenda of the Israeli government. Most recently this has meant acceding to Netanyahu's...

Ron Enzweiler exposes some of the falsehoods behind the developing story about supposed Russian bounties on American soldiers in Afghanistan. For one thing, outlets like the New York Times have implied that there is consensus among America's intelligence agencies on...

Episode 442: Is There A Marxist Revolution In The Streets? Pt. 1 w/ Dave Smith

64 Minutes Some Strong Language The host of the Part of the Problem podcast, Dave Smith, joins Pete to go over audios of one of the founders of Black Lives Matters and one of their training Arms, Indivisible, to examine what the goals of these protests and their...

59 Minutes Suitable for All Audiences Mike Swanson is the author of "The War State: The Cold War Origins Of The Military-Industrial Complex And The Power Elite, 1945-1963." He joins Pete today to give an overview of the MIC's origins, and how it has grown into the...

US News A Bernie/Biden unity task force announced Biden's would not support ending qualified immunity or legalizing marijuana. [Link] A top Biden aide says he will review Trump's decision to remove some troops from Germany. [Link] Foreign Policy The US sanctions four...

On FPF #516, I discuss how Russiagate conditioned people to buy the fake Bountygate story. Russiagate has pushed a false narrative about Russia for four years. Now many Americans, believing Putin is the ultimate enemy, are willing to believe any lie spun about Russia....

Tommy dives into the Ghislaine Maxwell arrest. He discusses Jeffrey Epstein's influence on Ghislaine, her friend's interview, obvious disinformation, and are the dominoes about to fall? Will she name names? Who's going down with her?...