“WAR is a racket. It always has been. It is possibly the oldest, easily the most profitable, surely the most vicious. It is the only one international in scope. It is the only one in which the profits are reckoned in dollars and the losses in lives. A racket is best described, I believe, as something that is not what it seems to the majority of the people. Only a small “inside” group knows what it is about. It is conducted for the benefit of the very few, at the expense of the very many. Out of war a few people make huge fortunes.” 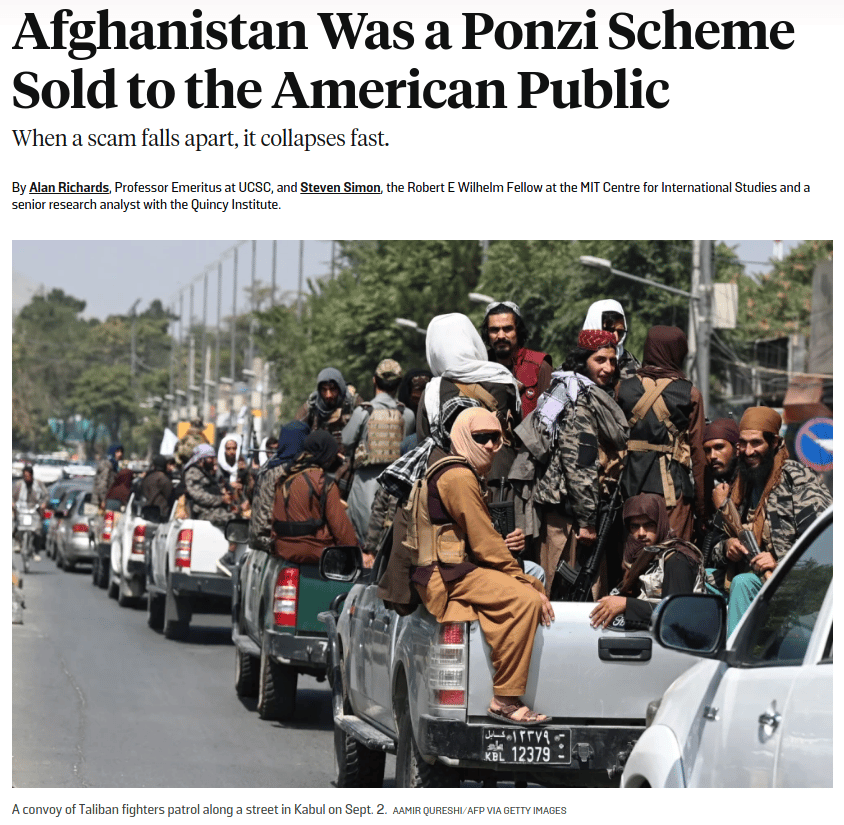 As the political fight over who lost Afghanistan gets bloodier, the latest round has shifted from lamentation over the probable return of al Qaeda to the disorderly exit from Kabul. Vivid images of chaotic activity at the airport underscore this concern. But, in fact, the withdrawal could never have been orderly, as critics unthinkingly imply. An orderly, carefully prepared exit was structurally impossible.

To understand the U.S. exit from Afghanistan, think of Bernie Madoff. It is helpful to see the U.S.-built Afghan state as a Ponzi scheme—it was all a house of cards, and, at some level, everyone knew it. Certainly, anyone who was familiar with the U.S. government’s own inspector general reports over the past 10 years would know.

For those unaware of the Madoff scandal, a Ponzi scheme is a series of lies, with little or no factual basis, that are sold to investors as brilliance. It depends on a continual infusion of funds from new investors; the new payments are initially used to pay the original investors. So long as more and more investors can be conned into providing their money, funds are found to pay previous investors, and the scam can continue. When it becomes hard to get continued funding, or when important investors begin to withdraw, others notice, become skeptical at first, then panic, and finally withdraw their money—and, as in a bank run, the rush for the exits ensues.

The U.S. Securities and Exchange Commission (SEC) notes that “Ponzi scheme organizers often use the latest innovation, technology, product or growth industry to entice investors and give their scheme the promise of high returns. Potential investors are often less skeptical of an investment opportunity when assessing something novel, new or ‘cutting-edge.’”

This definition can easily be applied to Afghanistan. First, there was a promise of very high return with little or no risk to the investor framed as a guarantee that the United States could defeat jihadis supported by and umbilically linked to Pakistan’s sprawling intelligence service, on their home turf, with only a small force, in a time frame tolerable to Americans, and with relatively few American casualties. Coming after a decade of American hubris following the demise of the Soviet Union, and amid the widespread fear and general panic after 9/11, the U.S. public was primed to believe in magic.

Investors were then told fantastical things by the Bush administration about how it had devised an entirely new approach to a terrible scourge and how it would eliminate evil. These promises were framed in terms of American exceptionalism, the mystique of special operations, the uncanny accuracy of armed drones, and the mysteries of counterinsurgency warfare decoded and applied by uniformed wizards.