‘But If We Just Kept The Articles of Confederation…’ 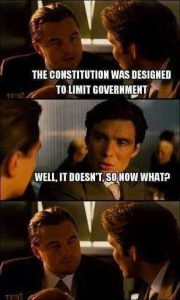 When someone brings up the quote by Lysander Spooner, “But whether the Constitution really be one thing, or another, this much is certain – that it has either authorized such a government as we have had, or has been powerless to prevent it. In either case it is unfit to exist,” very often they are met with the retort, “the Articles of Confederation had sufficient protections and should have been kept.” While anyone who has read the AOC would agree that individual and local/state liberty was greater under its existence (for less than half the population but the Constitution did nothing to change that), the fact is that the AOC did nothing to stop the coup that was the secret implementation of the Constitution.

Lesson? They’re pieces of paper with no power to prevent tyranny. When a population decides to give away a portion of their liberty for the security of a State, those that are granted the reigns of power will increase it unless the business end of a weapon is constantly pointed at them.