Donald Trump Continues to Make the Case for Limited Government 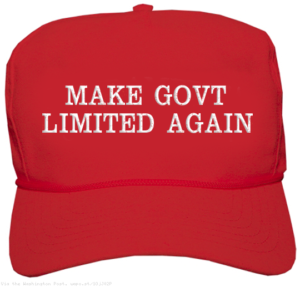 Not intentionally, of course. But he’s making the case nevertheless.

Today, he did so on Twitter, offering this barb to the Boeing Corporation:

Boeing is building a brand new 747 Air Force One for future presidents, but costs are out of control, more than $4 billion. Cancel order!

It was not immediately obvious where the $4 billion figure came from, but there is something useful in the spectacle of a head of state lashing out at random and making procurement decisions via social media. It’s the virtue of having a Buffoon-in-Chief.

It’s no secret that many people, for good and not-so-good reasons, are quite terrified of having Donald Trump as president. And each time he does something like this, that is well outside the bounds of normal presidential behavior, it’s a brand new reminder that a) the president-elect is unpredictable and b) that unpredictable person is about to acquire massive powers to interfere with the economy (and many other things too).

As a result, each of these incidents also makes an excellent case for limited government. And it makes the case for an audience that, in normal circumstances, would have zero interest in it–namely people in the center and on the left of the political spectrum.

They may have been okay with President Obama having the power to regulate and intervene in every inch of the US economy. But what about this guy? No way.

As for Boeing, their stock dropped quickly based on this news, but ultimately recovered before the close. In any case, it’s difficult to feel too sorry for one of the largest corporate welfare recipients in the US. They made the decision to live off government contracts and favors, and that comes with the risk that they may eventually cease.

In the near-term, however, Boeing’s corporate welfare is probably quite safe under a president that has promised to “rebuild” the US military.