From the  Free Thought Project 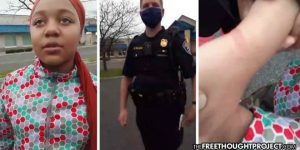 Rochester, NY — A video posted to Facebook this week has caused quite the ruckus after a 10-year-old girl was handcuffed during a traffic stop on Sunday. The mother of the little girl, Aqueelah Sovereign El Bey is now demanding justice.

According to police, they initiated a traffic stop on Sunday over an expired inspection sticker. El Bey and her family are among those who do not believe the United States government and other state policies and laws apply to them, otherwise known as sovereign citizens. So, they don’t believe they must pay for these government stickers to move freely throughout the country. They also believe that they have diplomatic immunity when being stopped or detained by those who claim authority over them.

In the land of the free you can be arrested for “obstructing governmental administration.”

After the initial traffic stop three people were arrested and charged: