Hillary Clinton: The Russians Are Coming – To Elect Tulsi 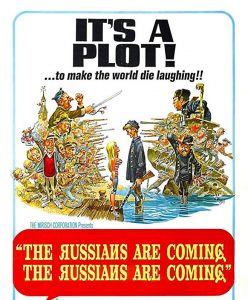 First the Russians were able to steal the election from Hillary and place Trump in the White House.  Now the evil Russians and their leader Putin have another favorite candidate – Tulsi Gabbard.

“They are also going to do third party again,” Clinton said. “I’m not making any predictions, but I think they’ve got their eye on somebody who is currently in the Democratic primary and are grooming her to be the third party candidate,” Clinton said, referring to Gabbard”.

“She is a favorite of the Russians. They have a bunch of sites and bots and ways of supporting her so far. That’s assuming Jill Stein will give it up, which she might not because she is also a Russian asset.

Yep, That’s How It Works Alright

Most Americans believe Russia targeted U.S. soldiers, want sanctions in response, Reuters/Ipsos poll shows "I don't believe anything the government tells me. Ever." --George Carlin "Nu-uh, you're dumb. Government is our leader." --Everybody else.

END_OF_DOCUMENT_TOKEN_TO_BE_REPLACED

More On Michele Flournoy From Kelly B. Vlahos

Highly educated, elitist upbringing, high achiever, successful - 'She’s a technocrat—smart and efficient and highly bred for Washington’s finely tuned managerial class." "But elite is as elite does. She went from Beverly Hills High School to Harvard to Oxford, and...

END_OF_DOCUMENT_TOKEN_TO_BE_REPLACED

Harley is putting the entire interview archive -- 5,300 and counting -- on there.