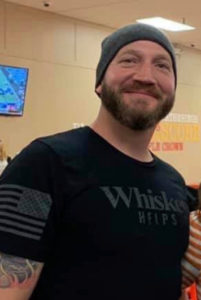 Ryan Whitacker was shot and killed by Phoenix police on May 22, 2020 after a neighbor called in a noise complaint. The neighbor didn’t just call the cops and complain about the noise, he told the 911 dispatcher “It could be physical”.

Eric July writes: “A neighbor called the police about a noise complaint. The neighbor was just answereing the questions from the dispathcer fast because he was annoyed and wanted it dealt with. In the 911 call he says “it could be physical. I could say yeah if that makes anyone hurry on up. Get anybody here faster.” So he was willing to make it sound like there was domestic violence, but there wasn’t. He simply wanted the noise to stop because he needed to get to work in the morning.”

It turns out Ryan and his girlfriend were just making salsa and playing games.

Eric July is going to talk more about this today

I'll have a video on this tomorrow. pic.twitter.com/wX9y6hBXeR

This killing follows the shooting of James Porter Garcia who was shot by Phoenix police in the driveway of a friends house after a neighbor reported a man had stabbed him. 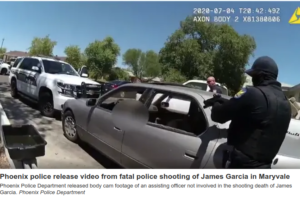 “It sounded like a war had broken out in front of my house,”

“According to police, someone called 911 about 1 p.m. Saturday to report that a man who had tried to kill him a week before had returned, threatening to harm him. The caller said he was hospitalized after the man stabbed him a week before. Police arrived in the area of the 5600 block of West Glenrosa Ave., which is north of Indian School Road and west of 55th Avenue. Officers talked to the 911 caller “who pointed out a specific home where he said the stabbing suspect was,” police said in a news release on Saturday. Police talked to “several people including a man inside of the vehicle in the driveway,” said the spokeswoman, Mercedes, in the YouTube video. “Officers talked to the man for approximately 10 minutes, asking him to leave his car so they could secure the scene. He refused and eventually rolled up the windows and pulled out a gun,” she said. “Officers ordered the man to drop the gun but he refused. The man repeatedly told officers to shoot him and lifted the gun toward officers. That’s when two officers fired their weapons.”

There was no indication from the police that Garcia had anything to do with the stabbing incident.

More on the problems with the Phoenix Police Department here.