Of course their is a partisan divide among Republicans and Democrats.

Among Democrats, 57 percent say they feel it was wrong to remove U.S. troops from the region. Despite criticism from leading Republicans, only 16 percent of GOP supporters think the withdrawal was the wrong call. 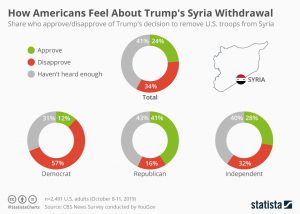