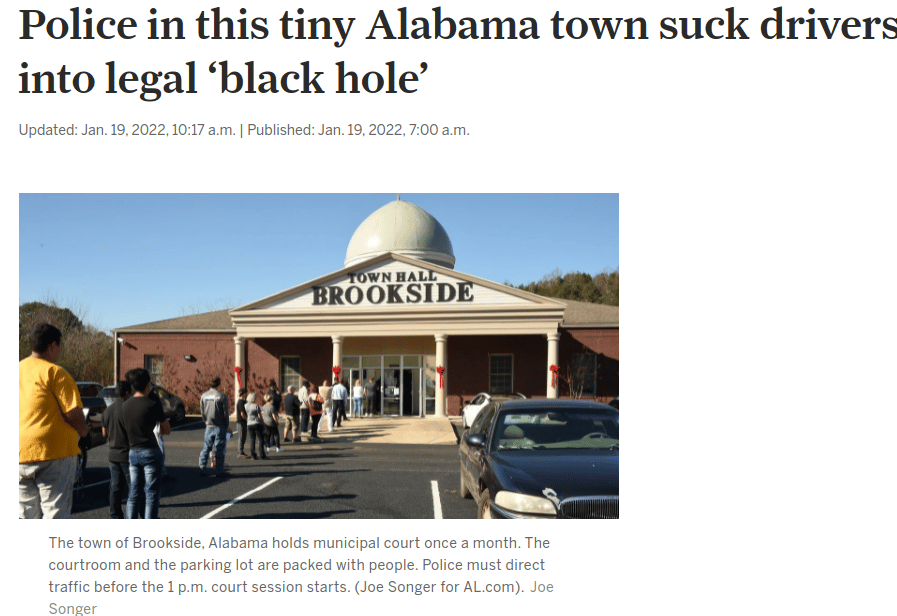 “It’s my understanding that a guy can go out there and I mean, he can fall into a black hole,” Jefferson County District Attorney Danny Carr said of drivers getting entangled financially. “You know, we’ve had a lot of issues with Brookside.”

“We get calls about Brookside quite regularly because they really go outside their jurisdiction to stop people,” Pettway said. “Most of the time people get stopped, they’re going to get a ticket. And they’re saying they were nowhere near Brookside.”

“This is shocking,” said Crowder. “No one can objectively look at this and conclude this is good government that is keeping us safer.”

Because people overwhelmed by debt have been shown to turn to crime to pay their fines “an argument can be made that this kind of policing creates crime,” Crowder said.

Brookside Police Chief Mike Jones, who spearheaded the change and grew the police department tenfold, at least, calls the town’s policing “a positive story.” Mayor Mike Bryan – a former councilman who assumed his position last year after the death of the previous mayor – sits and nods in agreement.

Jones said crime when he took over was higher than it appeared from numbers the town reported to the state. He said response times were long because Brookside often had to rely on the Jefferson County Sheriff’s department for service.

He said he’d like to see even more growth in revenue from fines and forfeitures.

“I see a 600% increase – that’s a failure. If you had more officers and more productivity you’d have more,” Jones said. “I think it could be more.”