The new Top Gun movie is coming out and you can be sure the military is all over it.  According to Spy Culture, the military believed the original movie inspired the famous Tailhook scandal. Because of this, the Navy withdrew support for Top Gun 2 and thus the 20 year wait for a sequel.

Spy Culture is reporting that both Top Gun and Top Gun 2 have been heavily censored by the military.

The initial trailer for Top Gun 2 is out and their is already accusations that the patches on the jacket Maverick is wearing have been altered to appease Chines sensors.

it is certainly true that changes have been made to Hollywood films in order to gain access to the lucrative Chinese domestic market.

What every single report on Maverick’s jacket has failed to mention is that the military heavily censored the original Top Gun film, going line-by-line through the script and removing or changing anything they didn’t like.

As per usual, when it’s ‘them’ doing the censoring that’s a problem that demands reportage, but when it’s ‘us’ it gets overlooked.  So strap into your cockpits, because the next few months of Top Gun: Maverick coverage are going to be a bumpy ride. 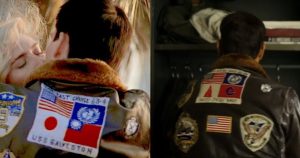