The Taxpayer Advocate Service just released a road map of the “modern” US tax system and just as you might expect it is a mess of government agencies (that don’t communicate with each other), rules and laws that the average person is just not going to take the time to wade through.

National Taxpayer Advocate Nina Olson released the map Wednesday.  “Anyone looking at this map will understand that we have an incredibly complex tax system that is almost impossible for the average taxpayer to navigate,” said Olson, who is retiring at the end of this month. 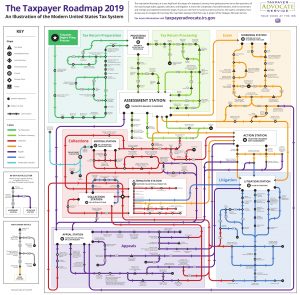