William Ruger and Rajon Menan make the case for leaving Afghanistan in the Washington Post. Whatever you think of Trump, you have to admit he forces people to take a side. His threats of pulling troops out of Afghanistan and Syria has exposed the pro-war uniparty in D.C. and how weak their arguments are.

Isn’t the point that they may be in bodybags if they’re not withdrawn? Who constructs these insipid soundbites? https://t.co/lxY2EvfRrt 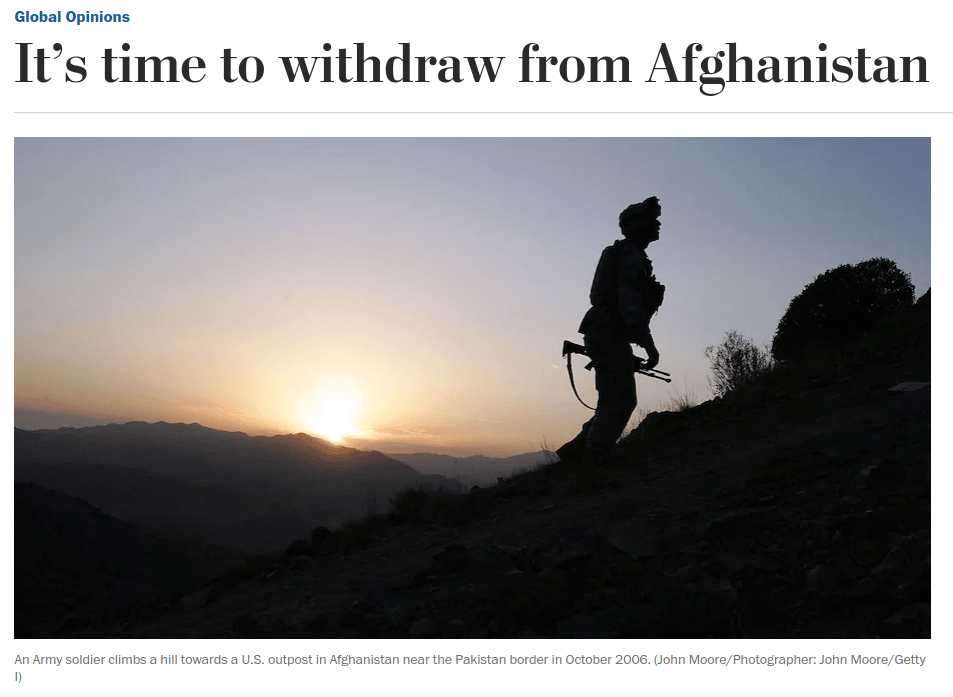 Arguably, the most important foreign policy pledge President Trump made during the 2016 campaign was to end the “forever wars” in Iraq and Afghanistan. That promise appealed to broad swaths of Democrats and Republicans, though certainly not to the leaders of either party, who generally embraced the prevailing view that the U.S. military’s departure from Afghanistan and Iraq would have calamitous consequences. Today, nearly three-fourths of the public favor ending both campaigns — including a similar proportion of veterans and military families.

Washington has been abuzz with speculation that Trump plans to make good on his 2016 vow by ordering yet another drawdown of troops. In Afghanistan, where our post-9/11 presence has now lasted for almost 20 years, more than 2,300 U.S. servicemembers have been killed and many more wounded. The campaign in just this country has already consumed about $1 trillion dollars.

Successive U.S. administrations have sought to create a democratic Afghan government that can govern and secure the country without open-ended U.S. military support. Yet that scenario is nowhere in sight, nor is there any credible evidence that it will be if we stay the course.

It is, therefore, time to bring U.S. troops home. There is little reason to wait for some more perfect moment in the future. Moving with all due haste has the added advantage of making it more difficult politically to unwind.

Coalition forces and the Afghan army have killed some 20,000 to 35,000 Taliban fighters, including many senior commanders. But the Taliban remains a major force and now controls more territory than it has since its government was toppled by U.S. firepower in 2001. The Long War Journal estimates that the Kabul government now controls only a third of Afghanistan’s 407 districts. The rest are up for grabs (46 percent) or under Taliban rule (19 percent).

Our expansive war aims in Afghanistan include vanquishing the Taliban, fashioning an effective Afghan government and promoting human rights. All of these remain just as elusive as they were at the end of 2001 — despite the vast amounts of blood and treasure we have expended.

Yet, for all their differences, Democratic and Republican leaders remain convinced that a U.S. military withdrawal would destroy American credibility, demoralize allies and produce shock waves that will course through the region.

Yet those who make these arguments cannot explain how continuing the war will produce an outcome that could, even minimally, be described as a success. There is no chance the Taliban will make additional major concessions given that momentum favors them, and that cannot be changed without increasing U.S. troop levels. Though vastly outmatched in numbers and firepower, the Taliban has demonstrated the will to fight for longer and die in larger numbers than the United States is prepared to do. To assume that a few more years of U.S. effort will change this reality amounts to magical thinking.