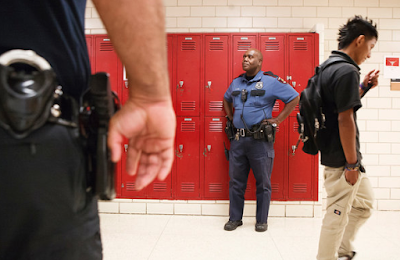 Ever and always alert to new and inventive ways to turn innocent people into fodder for the State’s carceral apparatus, the Missouri state legislature enacted a measure that will treat teenage altercations as felonies if they occur either on school grounds or between public school inmates in transit to or from their local mind laundry.

The Hazelwood School District, in a dispatch to the parents who surrender their children into their daily custody, explained that “if two students are fighting and one child is injured, the student who caused the injury may be charged with a felony. Student(s) who are caught fighting in school, bus, or on school grounds may be charged with a felony (no matter what the age or grade level).”  (Emphasis added.)
Yes, even grade school students or kindergartners will face the prospect of being detained, handcuffed, and charged with an offense that could lead to a prison term of up to seven years. Rational people would never inflict such grotesque punishments, of course, but as Springfield resident Gavin Devic can attest, rational people are not at the helm of the Show-Me State’s educational soviet. 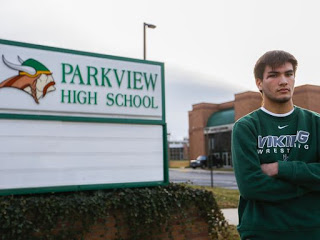 Devic wasn’t shunted through the school-to-prison pipeline, but the local drug prohibition apparat will probably succeed in derailing the disciplined, accomplished young man’s academic and athletic goals. Just as some people claim that it is possible to experience a “contact high” through exposure to marijuana smoke, adherents of the prohibition cult believe that it is possible for people to experience “contact culpability” in similar circumstances.
Gavin has maintained a GPA very close to 4.0 while working two part-time jobs and compiling an enviable record of 75 wins in wrestling, an achievement that had earned him multiple scholarship offers. On December 2, faced with the unfamiliar prospect of some free time, Devic allowed himself the indulgence of a short nap that was interrupted when a friend showed up to invite him to go to a dance at Parkview High. As Devic got into his friend’s car it became clear that the other young man had been consuming the Satanic Communist Demon Weed Marijuana.
Since Gavin had not partaken of the substance that makes incoming Attorney General Jeff Sessions lose bladder control, he assumed that he wouldn’t get into trouble. Like too many other people he underestimated the sadistic resourcefulness of those who act on behalf of the evil fiction called the “State.”
Shortly after he arrived at the dance, Gavin was pulled aside by one of the “resource officers” who prowl the school’s hallways in search of young lives to ruin. In compliance with his training and professional expectations, the officer lied to Gavin by claiming that he displayed all of the indicia of marijuana use, including the fact that his “eyes were low” — something that could be explained by the student’s half-Asian ancestry.
As search of the friend’s car turned up a small quantity of the prohibited plant and related accessories. Under questioning, and doubtless seeking to mitigate his own punishment, the friend initially said that the pot and paraphernalia were jointly owned (as it were) by the two of them. This was an obviously self-serving claim on his part, but it was sufficient to “prove” Gavin’s guilt in the eyes of people predisposed to punish, rather than investigate. 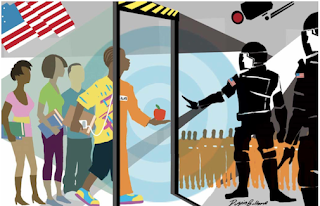 The perfidious friend later recanted his story and provided a statement exculpating Gavin. At his own expense, Gavin obtained a drug test proving that there was no THC in his system. An incident report filed by the school resource officers grudgingly admitted that “nothing illegal or prohibited” was found on Devic’s person. All of this mattered not to the local prohibitionist priesthood, which cannot look upon pot use with even the least degree of allowance, and will sternly punish even the appearance of “evil.”
Gavin was suspended from school for ten days, barred from athletic competition for a month, and lost his A+ scholarship eligibility, which would have covered the first two years of in-state tuition at numerous colleges. The “citizenship” component of that scholarship was ruined by the suspension.
“I am losing all the options I was setting up for myself,” Gavin laments. This is entirely in harmony with the purpose of the state-run school system, which is to indoctrinate inmates in the idea that their lives belong to the state, not to themselves — and that those lives can be ruined, in an instant, at the whim of those who presume to rule the rest of us. This week’s Freedom Zealot Podcast examines the bizarre and infuriating case of Idaho Falls resident Michael Whiteley, wrongfully convicted of kidnapping and raping his ex-wife — a woman who twice recanted her accusations, and provided evidence that Whiteley was framed to cover up a rape committed by a police officer:

Please be sure to check out the Libertarian Institute.