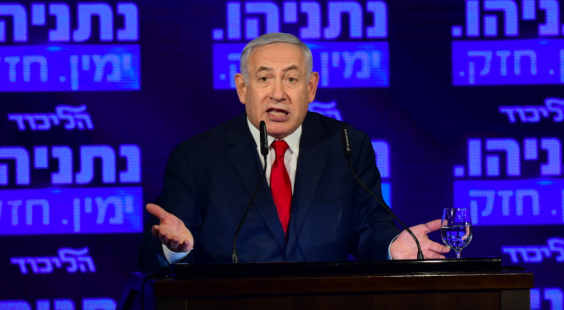 Elections are only weeks away in the US’s “51st state,” Israel. This comes as a result of Benjamin Netanyahu, the longest “serving” prime minister in Israel’s history, being unable to form a coalition after the last election despite the right-wing getting a clear majority of the Knesset. This is due to infighting between the religious and secular right-wing factions.

Israel now heads to a second election, despite it being clear the electorate wants a right-wing government. At the center of this election are personal fights between various politicians and over religious issues (Israel does not have a separation of Church and state) which are preventing Netanyahu from forming a governing coalition.

It’s hard to know exactly what will happen because Israeli elections are unpredictable with 6-8 seats (out of 120) worth of voters in almost every election deciding the vote on Election Day. This leads to almost every election night ending with at least one major surprise not predicted in the polling. Because of all of this, it is extremely hard to predict what exactly will happen.

That being said, the polling as of now suggests a similar result to the last election, a clear majority for the right-wing/religious party bloc with an inability to form a coalition government. If the current polling holds, Israel will be in unprecedented territory. Never before has the country been in a situation where you simply could not form a government, pass a budget or get anything done. If that indeed is the case there are a few possible outcomes, most of which begin with Netanyahu departing.

The ramifications of Netanyahu leaving the scene are far reaching. Netanyahu is both a brilliant diplomat and a worshipper of the status quo. His philosophy is that Israel is firmly in control of everything it wants to be in control of, and it should therefore do everything it can to not rock the boat. For this reason, he has not made any major moves in any direction since retaking power in 2009. He has tactfully avoided (with one notable exception due to political pressure) building new settlements, but has been more than happy to expand existing ones. He hasn’t attempted to retake Gaza but he’s more than happy to bomb it into the Stone Age when a conflict does arise. He’ll avoid dealing with an issue until he can no longer ignore it and then seek the solution that changes the least number of things. He likes to give nice speeches but avoid taking any unprecedented steps. In short, he’s a perennial procrastinator. His successor is likely to have a clear agenda they will want to push, and it probably won’t make the world a better place. That agenda might be expanding Israeli control of the West Bank, confronting Hezbollah in Lebanon or Iranian proxies in Syria. Whatever it is, it won’t be good news. On the bright side, his successor probably won’t be half the diplomat he is, which means Israel might actually face some accountability for its actions.

In short, if you are a Palestinian, buckle your seatbelt. You’re going to take the brunt of this. Whoever comes out on top is probably going to do things that won’t make your life better. On the other hand, not having Netanyahu means that in the long run you may be able to have an easier time pressuring Israel since he’s so good at dragging things out and extending things forever; something his successors will probably fail at.

If you are worried about Israeli control of American politics you should be cheering the idea of Netanyahu leaving, since whoever replaces him probably won’t be nearly as good at controlling things as Benji. Basically, Netanyahu is almost analogous to Mitch McConnel. He’s shrewd, very capable at controlling politics, but doesn’t have an active agenda. His replacement can be a Reagan or maybe even a Bolton type character, someone with a clear and very dangerous agenda, but someone who doesn’t have the political prowess to get things done in DC.

Another thing to bear in mind is that during periods of political uncertainty, Israelis tend to be more violent toward the Palestinians and their neighbors. This is because nothing is better for a politician than being tough on the “bad guys” and they can usually withstand international pressure by arguing (correctly) that it is only for reelection purposes and they have no choice but to be tough.

In summary, a period of political uncertainty is probably about to descend on “our greatest ally™️” and it’s most likely going to mean a more violent, more belligerent, but less diplomatically savvy country.

Kalmen Barkin is a New Hampshire based libertarian who spent a significant amount of time in the Israeli right before becoming a libertarian.