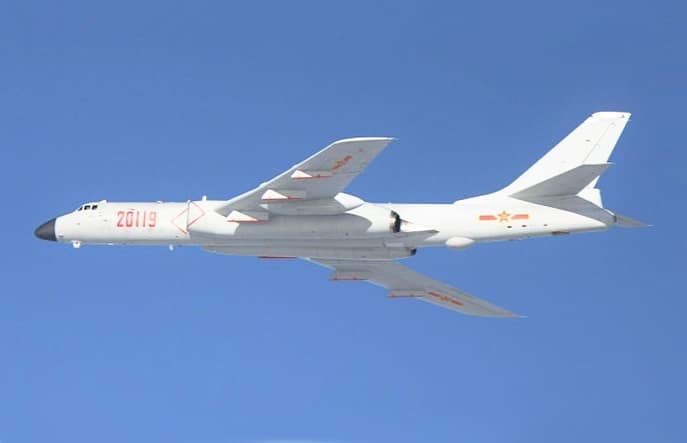 On Sunday, PLA Air Force spokesman Senior Colonel Shen Jinke told reporters, in recent years, the strategic bombers have carried out “countless” operations near Taiwan. Shen was speaking to the reporters at an air force open day. These past operations he referenced were likely in the island’s Air Defense Identification Zone (ADIZ) which is not recognized by international law and includes much of mainland China itself. A country’s airspace is directly above its territory, extending 12 miles off its coast. He added the “H-6Ks – along with other fighters, reconnaissance aircraft, early warning aircraft and [aerial] tankers – will continue to fulfil these missions.”

The report describes the H-6Ks as having a “a combat range of more than 3,500km (2,200 miles), the H-6K is designed to carry long-range CJ-20 cruise missiles for attacks on land and sea targets as well as short-range missiles like the KD-63.”

Shen also discussed the YU-20 aerial tanker, the “refueling variant of the Y-20 transport aircraft.” The YU-20 made its debut at the air force open day. Shen said the YU-20s were already being used in combat-readiness training and would “improve the long-range operational capabilities of other PLA warplanes – the first official announcement that the aerial tanker was taking part in drills. It was spotted on a PLA patrol near Taiwan for the first time in November.”

The same day, two Ticonderoga-class guided-missile cruisers, the USS Antietam and USS Chancellorsville, crossed the sensitive waterway between mainland China and the island of Taiwan in what the US Navy’s Seventh Fleet called “a routine Taiwan Strait transit.” The PLA said it was tracking the American warships and warned they were prepared “to thwart any provocation.”

During the Joe Biden administration, the US military has vastly escalated its activity near China, with troops openly deployed to Taiwan, training local forces, and the US Navy sailing warships through the Taiwan strait almost every month. Last year, Biden nearly doubled the deployments of air craft carriers to the South China Sea over the previous year and the US flew more than 2,000 sorties of reconnaissance aircraft in the East China Sea, South China Sea, and Yellow Sea

This latest passage was the first such “routine” transit since House Speaker Nancy Pelosi’s deliberately provocative visit to the island earlier this month. Pelosi’s stunt sparked the largest military exercises around Taiwan that China has ever launched. Beijing’s military simulated a blockade on the island, and fired missiles over the island. Chinese warplanes and warships have crossed the “median line” which divides the strait almost daily since the Pelosi incident. China and most of the world, including the United States, do not recognize Taiwan and agree the island is Chinese territory. But, since the Donald Trump administration, Washington has been sending ever more Congressional delegations and high level officials to the island which Beijing sees as a major violation of the ‘One China’ policy. China prefers peaceful reunification with the island, but will not rule out the use of force and has cautioned that US intervention and support for Taiwan’s “independence forces” could lead to war with the United States.