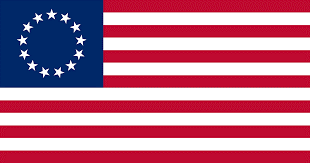 Another day, another controversy about Colin Kaepernick and so-called patriotism. This time, Nike pulled a line of shoes with the Besty Ross flag on the back because Kaepernick objected that it was flown in the slavery era. Others say it’s objectionable because white supremacists have started using it. In any case, it’s led to another call for boycotts against Nike.

Well, there’s a lot to unpack here. On co-option by white supremacists, I’m thinking,  should we let them troll the rest of society, and thereby do their bidding?

Then there’s the troubling fact that, indeed, yes, the Betsy Ross flag is from the slavery era. Also troubling that, for as much as Washington and Jefferson seem heroic for risking treason trials by the British, perhaps they DID deserve to be hanged, or at least overthrown, by their own slaves. So Kaepernick has a point there. And of course, our current U.S. flag with 50 stars has been in use since 1959, when segregation was still legally enforced in major portions of the country. I can see how, from Kaepernick’s bi-racial perspective, that the American Revolution and all that came after it wasn’t all that good for African-Americans, considering slavery was made illegal in the British Empire before it was in the States. And I always was in agreement with Kaepernick’s initial protest against cops shooting African-Americans.

About the Nike boycott. Boycotts were never my thing, regardless of the rightness or leftness of them. I appreciate that boycotts are a moral, non-violent means of regulating unethical business practices. It’s the libertarian approach, the anarchist approach. It does FAR less damage than the heavy hand of the State.

But still, I wouldn’t boycott for  simple Golden Rule reasons. “Judge not, lest ye be judged.” We are all born in different places, taught different values, have our own perspectives and personalities, and are just trying to figure it all out. I wouldn’t boycott because I wouldn’t want to be boycotted. As I’ve previously stated,

For as much as we blame “money” for all of society’s ills, the fact is it’s the glue that bonds society when politics and religion rip it apart. The ethical thing for a business owner is to put profits over his personal principles by serving his customers.

The better they make a chicken sandwich, or the more awesome their craft supply selection becomes, the less I want to know about the political beliefs or activities of business owners. And it’s my right not to know, or to care. Isn’t that why ballots are secret?

What you provide to the voluntary sector, to the market, is an expression of your best self. Of your self-expression. Not what you think others should do, but what you have already done, what came from within you.

If I like it, I’ll buy it. And if you like some new widget I might invent, I’d rather you not search my digital trail and conclude my pro-peace and pro-freedom views are anti-American and worthy of a boycott.

The opportunity for free exchange is the reason we create. It’s where joy and peace are found. Even love. Commerce builds friendships and understanding, politics reinforces hate.

And boycotting is a hateful act.

James Leroy Wilson (email) writes from Nebraska. He is the author of Ron Paul is a Nut (And So am I). Follow him on Facebook and Twitter. Support through Paypal is greatly appreciated. Permission to reprint is granted with attribution.