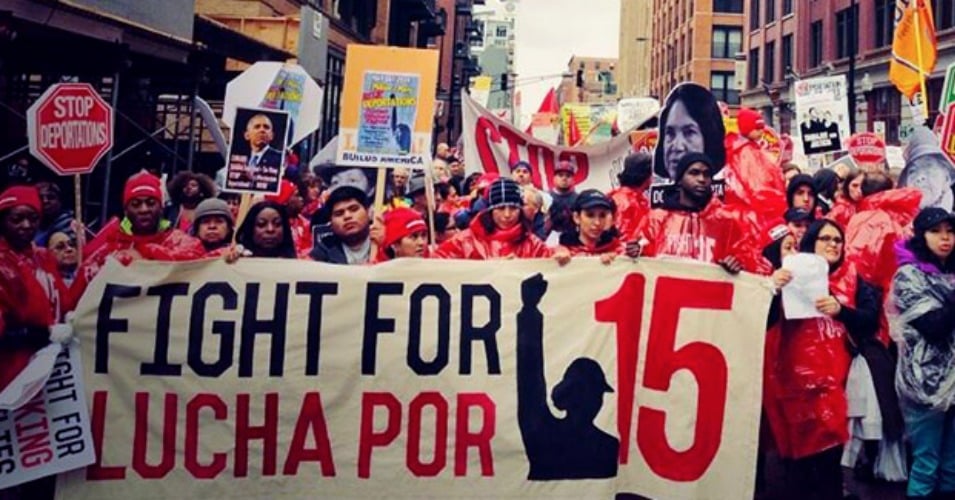 Among the hotly contested list of Joe Biden’s promises is an increase of the federal minimum wage to $15 an hour.

There are plenty of sound reasons to oppose government minimum wage laws, but there is one objection making the rounds that is based on bad economics and should be avoided, and that’s the “businesses will pass on the costs to consumers, making cheap goods more expensive” objection.

For instance, a now-deleted tweet by someone claiming that a $15 an hour minimum wage will cause Taco Bell burritos to explode in costs was shot down in short order by the tweet below. Scrolling through the replies also shows hundreds of other similar responses of people sharing the same experience in their cities that already have a $15 an hour minimum wage. Indeed, the responses were so decisive and numerous the original poster deleted his tweet to avoid further embarrassment. 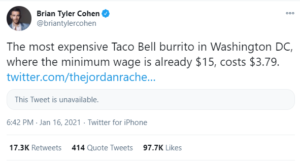 There are two main reasons why the “but tacos or hamburgers at fast food joints will cost $10” argument is easily shot down. First, is because it is bad economics.

In short, if Taco Bell or McDonalds could charge $10 per taco/burger, they already would be, regardless of wages and costs of other inputs. But businesses can’t just unilaterally increase their prices without a response from customers. The law of demand tells us that consumers will demand more of a good at lower prices, and less of a good at higher prices, other things held equal. Taco Bell doesn’t charge $10 for a burrito because customers won’t pay that price.

To illustrate this point, imagine if the government mandated a minimum price of beef at $15 per pound. Burger joints couldn’t just pass on the increased costs to customers. The demand curve for burgers didn’t change. Instead, burger joints would buy less beef.

The mandated increase in beef price did nothing to improve the quality of the beef, nor change the price customers are willing to pay for the finished product it’s used to make. To the extent burger joints still do buy beef; they will need to cut costs elsewhere on other inputs and expenses.

Fast food restaurants will decrease their demand for beef and seek alternatives, maybe instead sell more chicken sandwiches or salads.

Some larger national chains may be able to absorb the added costs of beef by dispersing the spending cuts across many other inputs spread out across thousands of stores, so it would be smaller mom and pop shops that will be hit the hardest.

Now swap ‘low skilled labor’ for beef. Businesses can’t just ‘pass along’ the higher input costs to customers. Government’s artificial raising of the price of an input will decrease the demand for that input, meaning that fewer low-skilled workers will have access to the important first rung of the career ladder.

Businesses will instead seek alternatives, like automated kiosks, that are more economical. Moreover, to the extent that businesses pay the increased minimum wage to employers that can’t be replaced, they will be forced to cut costs elsewhere, perhaps reducing fringe benefits, worker training programs, or even investments in workplace safety.

Moreover, warning against price increases in fast food or other goods provided by minimum wage workers misses the mark and exposes yourself to easy refutation. Changes in the costs of inputs, whether labor, raw materials, durable capital goods or anything else, does not change the demand curve for the finished good for which they are used. So when minimum wages are increased, the change will not be reflected in noticeable price increases, allowing minimum wage advocates to say “see, we raised the minimum wage and McDonald’s hamburgers still only cost a couple buck.”

Secondly, not only can your argument be easily dismissed on economic grounds, to the extent minimum wage advocates accept the faulty notion that increased minimum wages will cause the price of fast food and other low-price goods go increase, they can readily respond by saying they will happily pay a few cents more for a cheeseburger if it means the workers are paid a respectable wage.

Instead, we need to focus on the negative consequences of minimum wages on vulnerable, low-skilled workers, especially minorities. Follow the Horton rule: “attack the right from the right, and the left from the left.”

In the case of the minimum wage, we can address how, as Thomas Sowell has repeatedly pointed out, minimum wage laws have been a “disaster” for young and poor black people.

Not only is focusing on the negative impact minimum wage laws has on low-skilled, especially minority people more economically accurate, it also makes for a much harder argument for progressives to counter. Minimum wage laws end up disproportionately harming the very people its advocates claim to be helping.

Like so many other harmful state interventions, minimum wage laws need to fought and repealed. To be successful, however, opponents must avoid falling into weak and easily refutable arguments.