After the election of Donald Trump, the American people have been subjected to several different theories to account for the outcome. These theories have been offered by leading political figures and major media outlets. And each time one theory fails to prove sufficiently persuasive, it is either ratcheted up further or replaced–usually by a claim that is more sensational.

To date, the most prominent theories offered to explain the election have been the following, each proceeding in quick succession after the other:

As shown in the links above, there is good reason to be skeptical of each of these claims. True or not, however, I would argue they are also irrelevant. In fact, there is a much simpler explanation for why the Democrats lost the presidential election–namely, they nominated Hillary Clinton.

Now, I have nothing personal against the good Secretary–at least no more than I do against any comparably dangerous warmonger. But she was a very weak candidate for the general election. She brought all the scandal of Bill Clinton with a fraction of the charisma. She also had an active FBI investigation ongoing, which regardless of whether one thinks that was legitimate or not, remained a substantial political liability. This was never going to be a strong political combination.

Of course, it is true as her supporters often noted, that she was qualified–if by qualified we mean that she held many high governmental offices previously. Unfortunately, that doesn’t count for much in US politics. Al Gore had considerably more experience and qualifications than George W. Bush in 2000, and he still lost. The same would be true of John McCain who lost to a first-term senator, Barack Obama, in 2008.

Importantly, it is not a surprise that Hillary Clinton turned out to be a weak candidate. Polling data throughout the primary season clearly indicated this. Clinton’s main opponent, Bernie Sanders, consistently performed better in hypothetical match-ups against Republicans than Clinton did. Notably, Sanders performed best against Donald Trump. Additionally, Sanders’ favorability ratings grew as the campaign proceeded and more people learned about him while Clinton’s favorability decayed as the public gained more exposure. Over at The Intercept, Glenn Greenwald compiled a helpful summary of this data from February 2016 here, laying out a prescient case that Clinton had an electability problem. I’ve included a few key updated charts through the end of the election below: 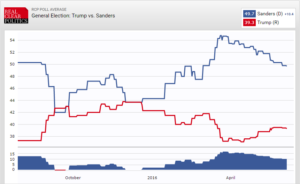 Sanders vs Trump over time 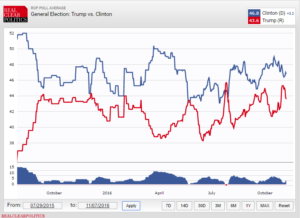 Clinton vs. Trump over time 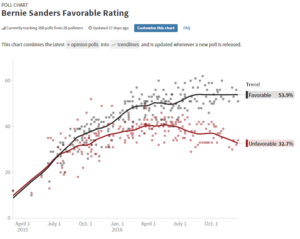 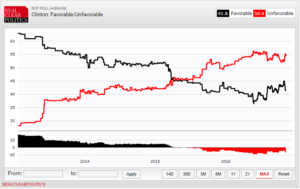 From these charts, a few observations emerge. Sanders’ lead against Trump was generally and more consistent than Clinton’s–thus, he was comfortably ahead for all of 2016 as the primaries finished. And unlike Clinton, his favorability ratings grew over time and then held constant.

From these simple observations, it also seems reasonable to conclude that Sanders would have almost certainly won the election if he received the Democratic nomination. Clinton supporters might suggest that Sanders fared better in polls only because he wasn’t victimized by the allegedly Russian-sponsored leaks and Comey’s conduct regarding the private server email investigation. But that’s sort of the point. It should not have been altogether surprising that there was additional fallout from the Clinton Foundation and the private server. The degree of the damage could not have been known, but the risk was certainly there at the beginning of the primary. Democrats nominated her anyway and lost because of it.

Critically, this suggests the election result was not about policy. Republicans may want to believe the election was a repudiation of Obama’s legacy, but at least in the presidential race, the evidence doesn’t support that. If voters were reacting to Obama’s decisions and policies, why would they be poised to overwhelmingly support a candidate in Sanders who wanted to double-down and expand on those very same policies? Clearly, they would not.

It’s also good news for Democrats and center-left elites in the media that have spent the last two months grasping for an explanation of Trump’s victory. It seems they were afraid that voters really were rejecting Obama’s legacy. So as an alternative, they promoted external factors as the cause instead–eventually settling on Russian hacking as a preferable explanation to believing that US public opinion had shifted dramatically to the right. In the process, these same officials and pundits have been willing to significantly escalate tensions between the US and Russia, as a political coping mechanism.

In fact, there was no need for this hysteria. The reality being avoided is not worth avoiding. Democrats did not lose because Americans suddenly rejected the Democratic policy agenda; Democrats lost because they nominated a bad candidate.

Once more people understand this, maybe we can all take a step back from the political ledge and start focusing on what matters. Donald Trump becomes president this week. The chance that he might ease tensions with Russia is one of the only things we have to look forward to.