Walking the Ruins of Empire

Walking the Ruins of Empire

At sixteen I was lucky enough to travel to Italy with my Latin class. The highlight of the trip for me was walking through the ruins of Pompeii. Standing in the shadow of the deadly volcano Mt. Vesuvius, you are keenly aware of the danger staring down at you. We walked to the top and stared into the abyss. It’s not actually that big as far as mountains go, but the horrid smell of sulfur, and the 2000 year old destroyed civilization beneath you is enough to intimidate.

The Romans who lived there knew the mountain was dangerous. They called the nearby sulfur pits the “Gates of Hell” and legend stated that it was where Aeneas and Hercules entered the underworld. But they ignored the danger. They built vineyards and villas all along its sides. Pompeii was the Roman version of Martha’s Vineyard, Beverly Hills, and Camp David all rolled into one. The emperor’s vacation palace was on the nearby island of Capri. The Roman elite vacationed in Pompeii and the nearby port of Herculaneum provided them all the variety of goods the empire could provide. The weather is about as good as it gets anywhere on Earth. When the slave gladiator Spartacus revolted this is where he went to raid and pillage. Just like when they asked Willie Sutton why he robbed banks, “because that’s where the money is.”

Tiberius, Rome’s second Emperor, loved the region so much he just stopped going back to Rome to rule and sent his aides. Then the Volcano blew in 79 AD, and a sizable chunk of Rome’s elites perished beneath the ash and lava. Even if they themselves survived, surely they knew someone in their country club that didn’t. They had certainly been humbled by nature’s God.

What followed in the next century for Rome was one of the greatest eras of peace and prosperity the ancient world had ever known. Historians call it the era of the Five Good Emperors. Rome enjoyed mostly stable borders, reached it’s greatest geographical size under Trajan, and generally avoided psychopathic rulers trying to elect their horse or murder sex slaves for fun. I don’t know, but I like to think that the elites of Rome having been reminded of their mortality at Pompeii had something to do with the following century.

The first four of the Five Good Emperors had no biological sons to whom they could pass the Empire, so they had to choose someone based on merit. It wasn’t until the philosopher Emperor Marcus Aurelius passed the empire onto his crack-addicted son Commodus that things went south. You’ve all seen Gladiator; no need to explain further.

Today in America, this empire has a different Volcano casting a perilous shadow over it: debt. Anyone paying any attention knows this is a grave threat, yet it’s almost never discussed. Turn on the news, listen to the politicians and talking heads move their lips; silence on the debt. $30 trillion and counting with more than $400 Billion to pay the interest just this fiscal year alone, according to the CBO. But that was before they really started hiking interest rates. By my calculations, and what the Treasury Department is reporting, it will be much much higher than that come September 30 when the fiscal year ends.

No need to spell it out any more; everyone knows how bad it is. 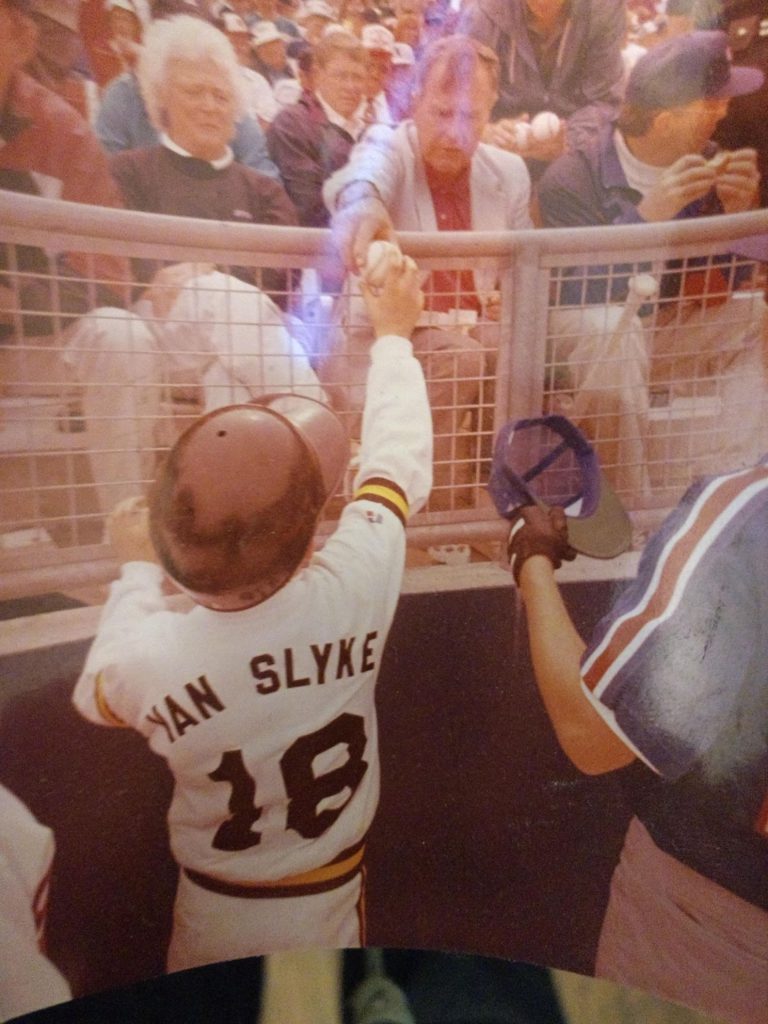 I shook George H.W. Bush’s hand once as a kid (pictured above), while George Jr. (left) ate peanuts and Jeb (right) looked around confused. The day he died I knew the empire was in for more trouble. He was the last of the ruling class who had ever been in a war. He knew what war was first hand. He watched his friends get killed. Say whatever bad things about him you want, even if he was evil that knowledge gave him some kind of humility, some kind of fear. Since he left office, the American presidency has been occupied by men who have never seen a war up close. There is no substitute for that kind of experience.

And so, this nation’s elites continue to use all of their might to maintain the status quo, only ever changing speeds by throwing harder (baseball joke). More war, more spending, and less peanuts for the masses. They have absolutely no plan to fix anything, and anyone with any integrity knows it. They pass new spending bills of hundreds of billions and call it debt reduction. Student debt, credit card debt, housing debt, and the national debt are all out of control and will not be fixed, certainly not by the current ruling class. Perhaps though, when the debt volcano finally erupts, what it buries can help return America to an era of peace and prosperity.