Walter B. Jones Restoring Power to Congress Act Would Repeal the 2001 AUMF

Walter B. Jones Restoring Power to Congress Act Would Repeal the 2001 AUMF 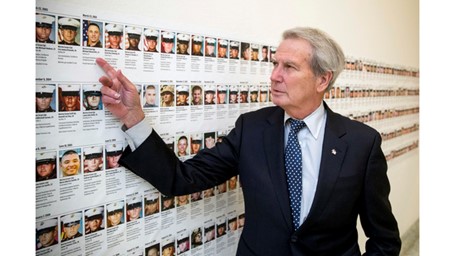 In his work opposing United States wars overseas, Rep. Walter Jones (R-NC), before his death Sunday, put much effort into seeking a repeal of the 2001 authorization for use of military force (AUMF) that has been used by successive presidents as a basis for intervention and war across the world in the name of fighting terrorism. In the week before Jones’ death, Rep. John Garamendi (D-CA) introduced the Walter B. Jones Restoring Power to Congress Act (HR 966), with Jones as the original cosponsor, that would repeal that AUMF and thus eliminate a reason used for presidents to intervene overseas without particular congressional approval.

Garamendi spoke fondly of Jones in Garamendi’s press release announcing the introduction of the bill,:

‘Congress has a Constitutional responsibility to debate and declare war, and we have abdicated that responsibility for far too long,’ Garamendi stated. ‘That is why I am introducing this legislation to repeal the 2001 AUMF within one year of enactment, which would provide ample time to debate this important issue in Congress. I am also grateful to recognize the leadership of my dear friend, Walter Jones, who is currently in hospice care. Walter has championed this cause for years, I have worked with him closely on this issue in Congress. I am grateful for his wisdom, passion, and advocacy.’

In March of 2017, Jones and Garamendi spoke in-depth in a C-SPAN interview about their effort to end funding for the US government’s war in Afghanistan. You can read about and watch that interview here.

In that interview, Jones said the 2001 AUMF has helped lead to a situation where “Congress is letting the president determine what is going to be done with our military when we have a constitutional duty to declare whether we want to send our men and women to die for this country or not.”

On Monday, Ron Paul spoke at his Ron Paul Liberty Report about Jones, Paul’s friend and US House of Representatives colleague who was a member of the Ron Paul Institute for Peace and Prosperity’s advisory board. You can watch Paul’s discussion of Jones here.