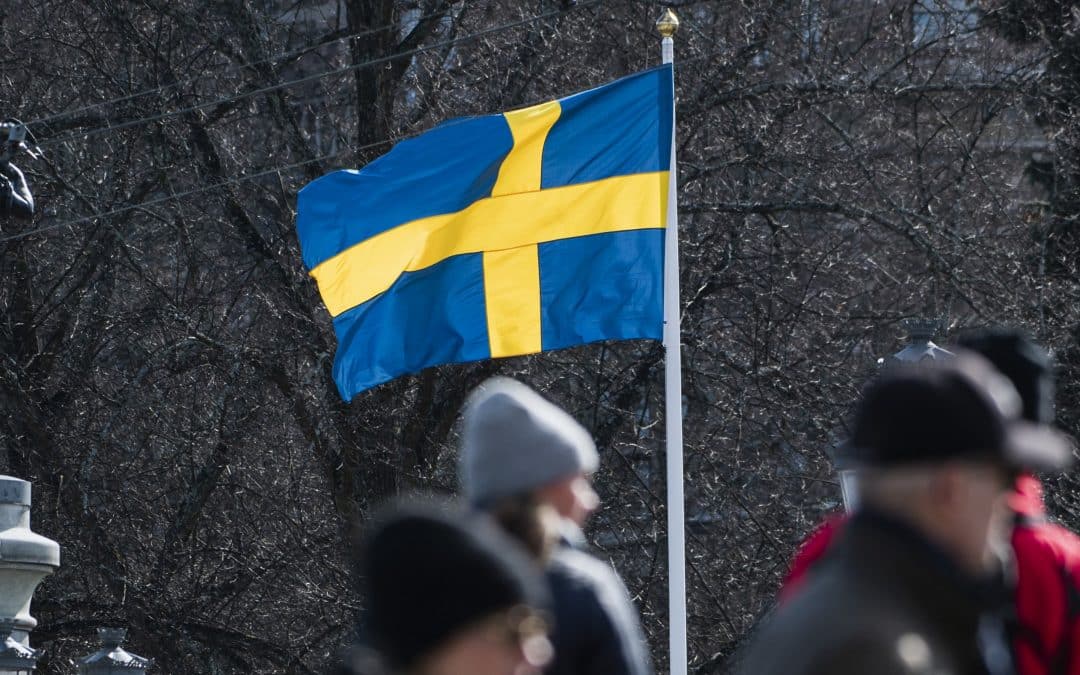 Socialism has failed repeatedly. Wherever you look—Cuba, Venezuela, India, France—the system has caused economic turmoil, stagnation, and even violence and oppression. But fear not, we are told—that was socialism simply “not done properly.” True socialism, however, can be seen in the Nordic countries, such as Sweden, Denmark, Finland, Norway, and Iceland. Progressives’ fascination with so-called “Nordic socialism”—and their desire to replicate it in America—rests on two premises. First, that they are indeed socialistic. Second, that they owe their prosperity to socialistic aspects of their economies.

There was arguably a time when some of these countries were socialist. For example, from the 1970s to the 1990s, Sweden’s economy was characterised by high regulations, limited business freedom, and onerous taxation. Between 1975 and 1990, although the Swedish population grew, net private sector job growth was zero. The public sector just continued to grow more and more. However, this was simply unsustainable, because, as the economist Henry Hazlitt explained, when you increase public sector capital, it is often offset by a reduction in private sector activity, due to higher rates of taxation. This all changed in the 1990s, when the labour market was deregulated, since then the private jobs’ market has boomed, as demonstrated by the graph below. 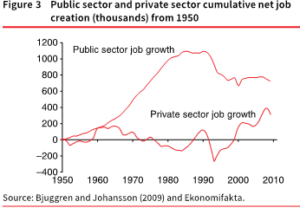 Since that time, Sweden has introduced a plethora of free-market reforms—not just in economics, such as the abolition of their dreaded wealth tax in 2007 and the privatization of major industries—but also in areas such as education. Since 1992, every child in Sweden has enjoyed what is known as “school choice,” where they get to choose their own school, privately or publicly run, and government money follows them (not the other way around). Healthcare is also an area of the Scandinavian economy which is becoming increasing more private-sector based. In recent years, private health insurance has become increasingly more popular in the Nordic countries, due to the growing dissatisfaction with the inefficiencies associated with government-run healthcare: according to a 2009 survey, half of Danes believe that medical waiting-times are too long, and only a third disagreed.

Nevertheless, the Nordic Socialism supporters point out, the Scandinavian nations do have many socialistic elements to their economies, such as high levels of spending, high income taxes, and large welfare states. But can they owe their high living standards to these factors? The problem is, they had such long before these policies were implemented. Between 1870 and 1960, Sweden had the fastest per capita income growth in the world (when it was a truly liberal country, in the process of industrialization). Since the institution of bureaucratic policies, however, this growth rate has slowed, and Sweden now ranks thirteenth. This applies to many other metrics we use. In 1960, Norway had the highest life expectancy in the world—and all its Scandinavian neighbours were in such a category. Since that time, the Nordic countries’ rankings have actually declined. This is demonstrated in the graph below. 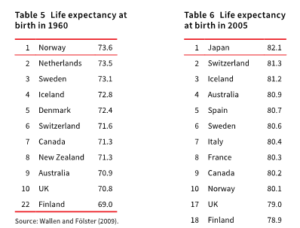 These positive social outcomes had developed long before the creation of the welfare State in the 1960s.

It is perfectly considerable that Scandinavians owe their prosperity to certain cultural values—namely, the Protestant work ethic. It may be one of the reason that the median income for Scandinavian Americans is nearly a fifth higher than the national average, and why their poverty rate is half the national rate. Low rates of single motherhood, and high employment rates for single mothers may also be a reason for Scandinavia’s low poverty rate (something which may be attributed to cultural norms and values), as single motherhood is a powerful predictor of poverty, both in the U.S. and many European countries.

Socialists may be obsessed with the idea of Nordic socialism. But it just simply isn’t the case that socialism is what has made Nordic countries great.

US News Biden will nominate Anthony Blinken to be Secretary of State. [Link] Mexico agreed to arrest a high-level cartel leader in exchange for the US dropping drug trafficking charges against the former Mexican Defense Minister. [Link] Trump officially exits the Open...

California’s financially battered restaurants filed government claims Monday to recover more than $100 million in fees for liquor and health permits and tourism charges that they say were assessed even though their businesses were shuttered or only partially operating...

Henry Szamota interviews Christian Sorenson from the new Eisenhower Media Network (EMN) on his book Understanding the War Industry. Christian Sorensen discusses the triangulation of Pentagon, Corporate and Congressional interests at the center of the massive spending...

CNN claims: Trump told ally he's trying to get back at Democrats for questioning legitimacy of his own election. Good. Fuck them. The Democratic Party should be outlawed for conspiring with the FBI and CIA to frame Trump for treason. They are the traitors to America...

I’ve heard some people compare the existence of the TSA (I used this erroneously for a while) to mask wearing, social distancing and lock downs as proof that the people will accept changes that are clearly theater and inconveniences when they are in fear. The problem...

11/18/20 Dan Caldwell: Trump Should Get Out of Afghanistan Before Inauguration Day

Scott interviews Dan Caldwell of Concerned Veterans for America about President Trump's plans to withdraw troops from the Middle East in what are looking to be his final weeks as president. The appointment of Colonel Douglas Macgregor to a senior role in the Pentagon...

Scott talks to Jacob Sullum about the allegations of widespread fraud in November's presidential elections. Sullum concedes that errors in counting, illegal votes and deliberate obfuscation do sometimes happen in isolated situations—but maintains that the widespread...

Kevin Gosztola discusses the abominable record of some of Joe Biden's key transition team officials, people who are likely to become high-level members of Biden's eventual cabinet. This list includes the usual war hawks and D.C. insiders, who are sure to return the...

Gareth Porter is back for a retrospective on Trump's foreign policy. Despite campaigning on a relatively non-interventionist platform, and indeed despite explicitly denouncing the policies of the Bush and Clinton families along the way, Trump has not been especially...

65 Minutes Safe for Work Jeff Monson is an American mixed martial artist and professional competitor since 1997. He has a black belt in Brazilian Jiu-Jitsu and has competed for the UFC, Strikeforce, Dream, Pride, M-1 Global, Impact FC, World Victory Road, and Cage...

101 Minutes Strong Language Curtis Yarvin is a prolific writer who used to blog under the name Mencius Moldbug. He is famous for coining the phrase and the concept of "The Cathedral." Curtis recently released an article on his Substack entitled, "Reflections on the...

115 Minutes Not Safe for Work Vin Armani returns to close out "The Dim Age" series of talks. He comments on what the installation of Joe Biden represents in the context of "The Dim Age." He and Pete then have a discussion on personal "spiritual" and "religious"...

63 Minutes Suitable for All Ages Bryan Sharpe, better known as Hotep Jesus, is a tech entrepreneur, podcast host and social commentator. Bryan returns to the show to discuss a subject he has written on extensively, the war on masculinity. Pete also brings up an...

On Conflicts of Interest #37, Kyle discusses recent Orwellian comments made by Senator Tammy Duckworth. The Senator responded to Trump's plan to bring US troops home from Afghanistan by claiming that it would KILL US SOLDIERS COMING HOME. Kyle updates Trump's...

Was the Constitution Defeated By Endless Wars? guest Mike Maharrey

On Conflicts of Interest #36, Kyle is joined by the great Mike Maharrey from the Tenth Amendment Center to talk about the president's war powers. Mike recently published two articles on how the president claims the authority to wage war in Somalia and Yemen. Mike...

Trump Will Come Up Short Ending Wars in Iraq and Afghanistan

On Conflicts of Interest #35, Kyle breaks down the recent changes made by Trump at the Pentagon. While the Blue Checks on Twitter speculated Trump was prepping for a coup, it is now clear Trump was actually getting rid of personnel who refused to end the wars in Iraq...

On Conflicts of Interest #34, Dave DeCamp joins Kyle Anzalone to discuss Trump and Biden's destructive foreign policy. Dave explains how Trump has carried out an aggressive policy against China. Reports say Biden is likely to just as, if not more, aggressive towards...

Government Itself is Immoral – James Corbett

https://youtu.be/q7Rebz2KD6E For example, consider slavery. Slavery is a system in which a nonviolent human being must labor for another under the threat of aggressive violence. For Rothbard, slavery is unjust because it violates the non-aggression principle....

https://youtu.be/-qbM_iv-Pqs Since the nature of man is such that each individual must use his mind to learn about himself and the world, to select values, and to choose ends and means in order to survive and flourish, the right to self-ownership gives each man the...

https://www.youtube.com/watch?v=RpYZZafQOPM The state cannot be fought by simply boycotting it, as a private business could, because an aggressor does not respect the negative judgement revealed by boycotts.  But it also simply cannot be fought by countering its...

Quincy joins Tommy once again to emphasize family and true friendship while diving into race and politics. https://traffic.libsyn.com/secure/strangerencounterspodcast/Race_Politics_and_the_Election.mp3

The Pentagon Shakeup and What Could Have Been w/ Scott Horton

Scott joins Tommy to discuss the recent shakeups in the Pentagon, what the moves potentially mean, Trump's rhetoric vs Trump's legacy, and where Trump's foreign policy failed and why. https://traffic.libsyn.com/secure/strangerencounterspodcast/Scott.mp3

138: An Unholy Alliance – The Socialist Left and Global Corporations

Tommy explores why and how the socialist left and global corporations created such a cozy marriage despite rhetoric suggesting the contradictory nature of such a matrimonial partnership. https://traffic.libsyn.com/secure/strangerencounterspodcast/Corporate_Left.mp3

Tommy touches on the stories of the last few weeks and the last 4 years. https://traffic.libsyn.com/secure/strangerencounterspodcast/Pre-Election_Circus.mp3