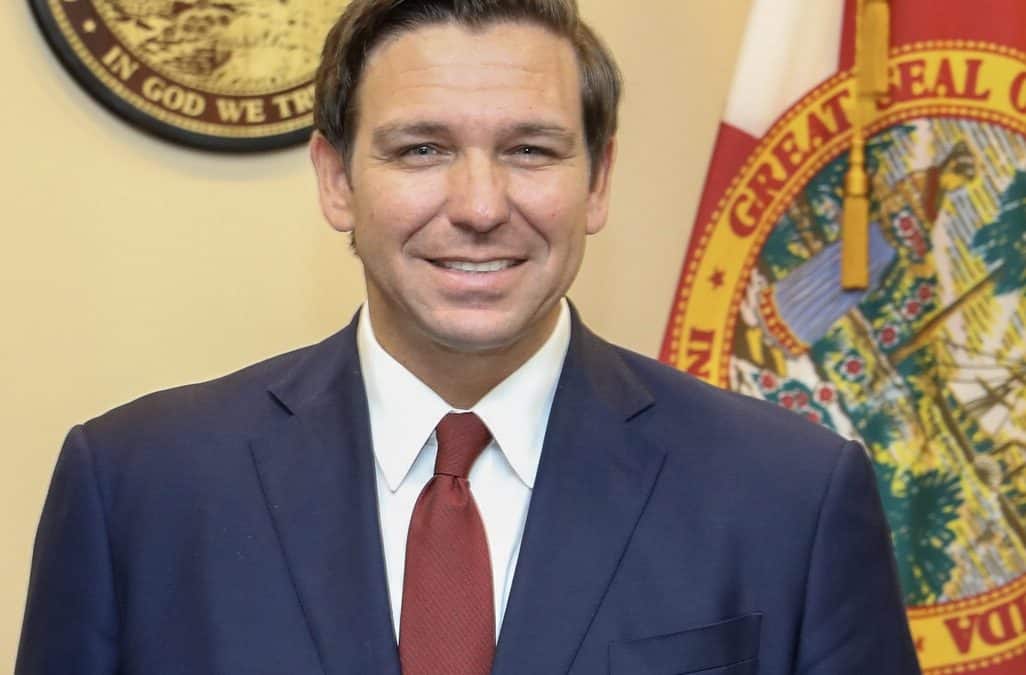 Florida Governor Ron DeSantis intends to violate both U.S. and Florida Constitutions with his regulation of Facebook, Google and Twitter.

No State shall enter into any Treaty, Alliance, or Confederation; grant Letters of Marque and Reprisal; coin Money; emit Bills of Credit; make any Thing but gold and silver Coin a Tender in Payment of Debts; pass any Bill of Attainder, ex post facto Law, or Law impairing the Obligation of Contracts, or grant any Title of Nobility.

SECTION 4. Freedom of speech and press.—Every person may speak, write and publish sentiments on all subjects but shall be responsible for the abuse of that right. No law shall be passed to restrain or abridge the liberty of speech or of the press. In all criminal prosecutions and civil actions for defamation the truth may be given in evidence. If the matter charged as defamatory is true and was published with good motives, the party shall be acquitted or exonerated.

The Contract Clause of the U.S. Constitution does not permit state governments to impair contracts between private individuals or companies. Big Tech is large and does censor people, including the great Ron Paul, but we must set aside our emotions and dissect what the Governor intends to do in the state of Florida. He wants to retroactively re-write terms of agreement that every big tech user must agree to in order to utilize their services. Although no money is involved, this is clearly a contract between two parties. And Big Tech, while onerous, is comprised of private companies. While some claim Big Tech is a monopoly this is false.

Some call for the elimination of Section 230. And while I commend any removal of statutes as good, there is an argument that removing the section would impair Big Tech’s ability to post user content. That is an argument best left for another day. The bottom line here is that Governor DeSantis is prohibited from rewriting terms of user agreements by the U.S. Constitution’s Contract Clause. For more information and more sanction on the contract clause see James Madison Federalist #44, Mr. William Davie in the North Carolina Ratifying Debates, and the contract clause in the Northwest Territory Ordinance and Act of 1787, art. II, ch. 8, § 1, 1 Stat. 51. 52. Also see Walter Williams, and Dom Armentano.

The idea that Governor DeSantis would interfere or regulate free speech is clear and receives sanction from Judge Andrew Napolitano. The Governor’s grandstanding is a slap in the face to those who believe in liberty, limited government, and free markets. Pushing aside the phony incorporation doctrine the first eight of the Bill of Rights do not apply to the states. That is why states have their own constitutions. With his proposed legislation Governor DeSantis is infringing on the Florida’s Constitution’s Freedom of Speech: “No law shall be passed to restrain or abridge the liberty of speech or of the press.”

Big Tech are also big earners for the state of Florida to the tune of 3.1 billion dollars last year. The Governor has conveniently forgotten this fact.

Here we have the Governor of Florida, whose duty is to protect Floridian’s rights, trampling on not only the United States Constitution, but his own Florida Constitution as well. His desire for higher office and his unwavering support for Donald Trump has blinded and crippled him as a protector of liberty.

US News Twitter added a ‘hacked materials’ warning to an article published by The Gray Zone detailing how BBC, Reuters, and Bellingcat were paid by the UK Foreign Office. [Link] The US opened a new facility to cage migrant children. [Link] The New York police officers...

Given the recent stories about Merrick Garland’s experience at the helm of the Oklahoma City bombing prosecution and his own comments about prosecuting white supremacists should he be made Attorney General, I have some questions about Garland’s handling of the OKC...

Enough Already: Time to End the War on Terrorism by Scott Horton, A Video Adaptation Commentary by the author. Directed by Gus Cantavero. Access the full video playlist here. https://youtu.be/RLFe4xWvhR8?list=PLq2qhcVwTVJRQuCWXMVUM8SG2qYDFoPZA

Eli Clifton discusses the Biden Administration's Afghanistan study group, a panel of national security experts and former officers giving recommendations on whether the U.S. should get out of Afghanistan on the Trump administration's withdrawal timeline. Some of these...

Ray McGovern talks with Scott about the lies and malfeasance of the national security state during the "Russiagate" fiasco. McGovern begins by rehashing the FBI's lies that first led to a FISA warrant on Carter Page, who they failed to disclose to the court was...

Scott interviews Gareth Porter about his coverage of the recent and widespread claims of a Chinese genocide of the Uyghurs. Many of these accusations have relied on the work of one man, Adrian Zenz, whose research Porter calls into question. Porter wrote a piece with...

Scott talks to Ben Wizner of the ACLU about the ongoing Julian Assange saga. Assange's attempted prosecution under the Espionage Act is practically unprecedented, says Wizner. While it's true that many leakers of government secrets have been charged for violations of...

55 Minutes Suitable for All Ages Independent journalist Jeremy R. Hammond returns to the show and starts by talking about his background and how he got into investigative journalism. He then discusses what he sees as the effects of the insane money printing over the...

58 Minutes Some Strong Language Clint is the host of the Liberty Lockdown Podcast and a former private money mortgage broker. Clint joins Pete to explain why the government's actions in the last 12 months is setting up a housing/real estate crisis that will be...

Episode 540: The Gun-Grabbers Are Back w/ Matt Freeman Of The Statist Quo Podcast

63 Minutes PG-13 Matt Freeman is a Vet and the host of the Statist Quo podcast. Matt returns to the show to talk to Pete about another gun bill that is making its way through Congress, HR127. They discuss its implications, whether they believe it can be passed, and...

COI #75 – Did Fauci Discredit Himself By Covering for Israeli Medical Apartheid?

On COI #75, Connor Freeman - writer at The Libertarian Institute - returns to the show to discuss the Israeli vaccination program. The program has received wide-spread praise from the US media and even Dr. Fauci. While Israel is vaccinating a lot of people, the...

COI #74 – Will Biden Break With Trump’s Aggression Against Iran?

On COI #74, Kyle and Will go over recent comments from the Biden administration signaling it's ready to sit down with Iran and European powers to discuss coming back into the 2015 nuclear deal. But with US officials hinting that other "regional issues" could be...

COI #73 – Is Biden Taking the American Empire in a New Direction?

On Conflicts of Interest #72, Kyle Anzalone discusses the recent attack on US troops in norther Iraq. The attack left one contractor dead and an American soldier injured. Hawks are claiming Iran was behind the attack and the US must respond. The link between Iran and...

The War on Terror: Origins, Motives, and Results. Scott Horton and Keith Knight

https://www.youtube.com/watch?v=Wwqph7MwUdQ In war, State power is pushed to its ultimate, and, under the slogans of “defense” and “emergency,” it can impose a tyranny upon the public such as might be openly resisted in time of peace. War thus provides many benefits...

The Truth About the U.S. / Saudi Genocide in Yemen – Scott Horton and Keith Knight

https://youtu.be/oF5SaB330gQ Mankind is a mixture of good and evil, of cooperative and criminal tendencies. In my view, the anarchist society is one which maximizes the tendencies for the good and the cooperative, while it minimizes both the opportunity and the moral...

https://youtu.be/hKHZH3W5KOA Dutch libertarian, law student, and longtime friend and supporter of the show, Thijs van der Linde joins me to discuss the recent anti-lockdown protests and rioting in the Netherlands. We also discuss his undergraduate law school thesis...

https://youtu.be/BCg98f1pypY Michael Boldin, director of the Tenth Amendment Center and the host of the Path to Liberty Podcast joined me to discuss methods the Founding Fathers prescribed for combating both poor constitutional and blatantly unconstitutional policy....

Is It Too Late To Buy Bitcoin w/Car

Car from Timeline Earth joined Tommy to discuss Bitcoin and the future of separation of currency and state. After Elon Musk and Tesla announced they will be accepting Bitcoin for purchases the price skyrocketed. Is this the peak? or just the beginning?...

Tommy invited Pete to discuss his strategies moving forward in combatting the propaganda and demonization coming from the cathedral since Trump losing the election. Free Man Beyond The Wall Pete's Substack The Monopoly On Violence...

Is Iran Close To A Nuke w/Scott Horton

Tommy invited Scott on to discuss the policies of the Biden administration in regards to Iran and the rumors surrounding Iran's nuclear capabilities and ambitions. Buy Enough Already Donate https://traffic.libsyn.com/secure/strangerencounterspodcast/scott_iran.mp3...

Erik Sawyer, formerly of the Revolution Report, joined Tommy to discuss current events, culture, and the Libertarian Party. They cover r/wallstreetbets, Doug Mackey, identity politics, the multi-front war against the cathedral, and how the culture of the LP has been...