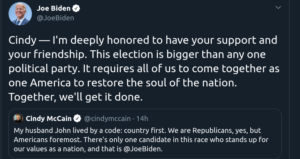 Biden is delighted to get support from Cindy McCain – that should motivate the democrats progressive base. After all, McCain was such an honorable man that lived by a code “country first”. Now McCain is the new democrat hero – right along side George Bush.

People forget how “honorable” McCain was during the Saving and Loan scandal of 1980’s.

McCain: The Most Reprehensible of the Keating Five

You’re John McCain, a fallen hero who wanted to become president so desperately that you sold yourself to Charlie Keating, the wealthy con man who bears such an incredible resemblance to The Joker.

Obviously, Keating thought you could make it to the White House, too. He poured $112,000 into your political campaigns. He became your friend. He threw fund raisers in your honor. He even made a sweet shopping-center investment deal for your wife, Cindy. Your father-in-law, Jim Hensley, was cut in on the deal, too.

Nothing was too good for you. Why not? Keating saw you as a prime investment that would pay off in the future. So he flew you and your family around the country in his private jets. Time after time, he put you up for serene, private vacations at his vast, palatial spa in the Bahamas. All of this was so grand. You were protected from what Thomas Hardy refers to as “the madding crowd.” It was almost as though you were already staying at a presidential retreat.

Like the old song, that now seems “Long ago and far away.”

Since Keating’s collapse, you find yourself doing obscene things to save yourself from the Senate Ethics Committee’s investigation. As a matter of course, you engage in backbiting behavior that will turn you into an outcast in the Senate if you do survive.

They say that if you put five lobsters into a pot and give them a chance to escape, none will be able to do so before you light the fire. Each time a lobster tries to climb over the top, his fellow lobsters will pull him back down. It is the way of lobsters and threatened United States senators.

And, of course, that’s the way it is with the Keating Five. You are all battling to save your own hides. So you, McCain, leak to reporters about who did Keating’s bidding in pressuring federal regulators to change the rules for Lincoln Savings and Loan.

When the reporters fail to print your tips quickly enough–as in the case of your tip on Michigan Senator Donald Riegle–you call them back and remind them how important it is to get that information in the newspapers.

The story of “the Keating Five” has become a scandal rivaling Teapot Dome and Watergate. The outcome will be decided, not in a courtroom, but probably on national television.

Those who survive will be the sociopaths who can tell a lie with the most sincere, straight face. You are especially adept at this.

More here just to remind folks of the “code” McCain lived by.