Hard to believe the situation in Yemen could get any worse but now their are reports of Saudi and UAE forces fighting in Southern Yemen.

Yemeni separatists have taken effective control of the port city of Aden after days of fighting with troops loyal to the internationally backed government.

Forces aligned with the UAE-backed Southern Transitional Council (STC) – which wants an independent south – said they had seized control of military camps and the presidential palace.

The opposing Saudi-led coalition said it had responded with military action.

The government itself characterised the STC’s seizure of Aden as a “coup”.

Coalition forces had called on the STC to withdraw from their positions in Aden or face further action. It said it launched its strike against a “threat” to the country’s government.

Nasser Arrabyee is reporting that Yemenis are fleeing Aden to Sanaa because of the fighting between the two factions. 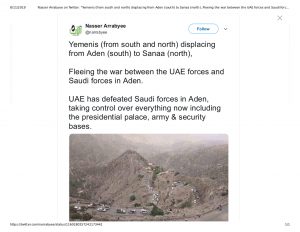 Doctors Without Borders on Saturday described Aden as “a battlefield” and said its hospital there was “stretched to the limit”. It said it treated 119 patients in less than 24 hours amid the fighting.

Nasser is interviewed here on the current situation.

As usual we hear nothing about this from the US media.  The people of Yemen though know exactly who is responsible for the death and destruction of their people and country. 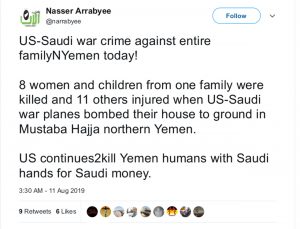