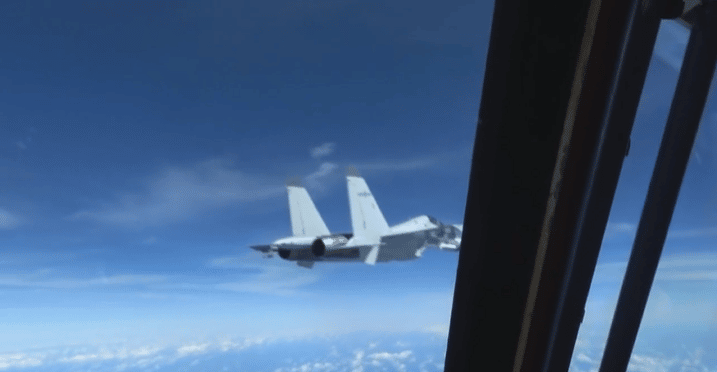 A Chinese fighter jet is seen from the cockpit of a US Air Force RC-135 reconnaissance plane during a close encounter at an unspecified location over the South China Sea, December 21, 2022. (Credit: US Indo-Pacific Command)

The DoD released the video on Thursday, but noted the “unsafe” encounter took place more than a week ago. “On Dec. 21 (China Standard Time), a People’s Liberation Army – Navy J-11 fighter pilot performed an unsafe maneuver during and [sic] intercept of a US Air Force RC-135 aircraft, which was lawfully conducting routine operations over the South China Sea in international airspace,” it said in a statement. “The [Chinese] pilot flew an unsafe maneuver by flying in front of and within 20 feet of the nose of the RC-135, forcing the RC-135 to take evasive maneuvers to avoid a collision.”

Published on the Pentagon’s media-sharing platform, DVIDS, the footage shows a Chinese fighter flying near the front of an American surveillance aircraft, though it is not seen crossing in front of the plane. The Defense Department claimed the Chinese jet approached within just 20 feet of the US RC-135, however it is unclear how the military arrived at that measurement.

While Washington maintains that the South China Sea is international territory, the Pentagon declined to specify the exact location of the close encounter. Beijing claims much of the region as its own sovereign waters, but has not responded to the American release of the video.

As part of a massive military buildup eyeing Beijing – launched by the Barack Obama administration and expanded by both of his successors – the US has flown myriad sorties with reconnaissance aircraft throughout the South China Sea, East China Sea and the Yellow Sea in recent years. In 2021, Washington flew over 2,000 sorties in those waters amid other American military provocations, such as a sharp increase in deployments of aircraft carrier strike groups to the South China Sea and near-monthly transits of the disputed Taiwan Strait by US warships.

With tensions between Washington and Beijing already soaring under the Biden administration, the risk of an accident or crash leading to further escalation is significantly heightened.