The main stream media devoted considerable ink to try and dispel the notion that herd immunity to the SARS-CoV-2 virus was not likely due to the nature of the immune response to the virus. They claim (mainly citing evidence from non-peer reviewed studies), that the immune response was short-lived and that as little as 10-15% of the population may be immune. However, research published in Nature paints a different picture of how our bodies immune system responds to the virus and how different levels of exposure and disease severity may illicit an immune response that produces potent antibodies against the virus.

As the SARS-CoV-2 vaccine race continues, and effective COVID-19 treatments remain scarce, many researchers are looking to find antibodies that would be an effective way to treat patients infected with SARS-CoV-2, especially early in the course of infection, and to prevent infection, particularly in the elderly. They could also be used to protect those in high-risk situations, such as healthcare workers in COVID-19 wards. 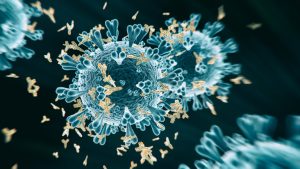 These antibodies can either be designed and engineered, based on similar infections such as SARS and MERS. Or, they can be isolated from people who survived a SARS-CoV-2 infection.

A team from Columbia University Irving Medical Center noted that they have isolated antibodies from several COVID-19 patients that are, to date, among the most potent in neutralizing the SARS-CoV-2 virus.

Their work is published today in Nature in a paper titled, “Potent neutralizing antibodies directed to multiple epitopes on SARS-CoV-2 spike.”

The team reported the isolation of 61 SARS-CoV-2-neutralizing monoclonal antibodies from five infected patients hospitalized with severe disease. Among these are 19 antibodies that potently neutralized the authentic SARS-CoV-2 in vitro, nine of which exhibited exquisite potency, with 50% virus-inhibitory concentrations of 0.7 to 9 ng/mL.

“We now have a collection of antibodies that’s more potent and diverse compared to other antibodies that have been found so far, and they are ready to be developed into treatments,” said David Ho, MD, scientific director of the Aaron Diamond AIDS Research Center and professor of medicine at Columbia University Vagelos College of Physicians and Surgeons, who directed the work.

The researchers have confirmed that their purified, strongly neutralizing antibodies provide significant protection from SARS-CoV-2 infection in hamsters, and they are planning further studies in other animals and people.

More at Genetic And Engineering News