According to an article at Middle East Eye by David Hearst, Saudi Arabia will execute three popular Sunni scholars on terrorism charges after Ramadan.

The Saudi arms purchases have paid for the silence of corrupt international governments, including the USA.

One source told MEE: “They will not wait to execute these men once the death sentence has been passed.”  A second Saudi government source said the execution of 37 Saudis, mostly Shia activists, on terrorism changes in April was used as a trial balloon to see how strong the international condemnation was. “When they found out there was very little international reaction, particularly at the level of governments and heads of state, they decided to proceed with their plan to execute figures who were prominent,” said the source, who like the first spoke on condition of anonymity.

Salman al-Odah, Awad al-Qarni and Ali al-Omari are all set to be executed after Ramadan 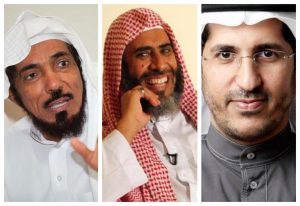