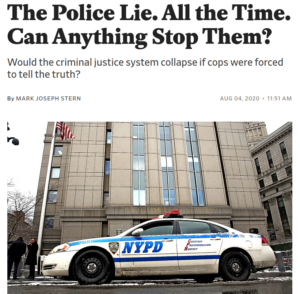 Mark Joseph Stern at Slate. The bureaucratic state passes laws that make it easy for cops to stop anyone at anytime for minor offences. The system incentives cops to lie and protects them from scrutiny. It is so bad that DA offices are keeping secret databases of unreliable police officers that they won’t allow to testify in court cases.

This tendency to lie pervades all police work, not just high-profile violence, and it has the power to ruin lives. Law enforcement officers lie so frequently—in affidavits, on post-incident paperwork, on the witness stand—that officers have coined a word for it: testilying. Judges and juries generally trust police officers, especially in the absence of footage disproving their testimony. As courts reopen and convene juries, many of the same officers now confronting protesters in the street will get back on the stand.

Defense attorneys around the country believe the practice is ubiquitous; while that belief might seem self-serving, it is borne out by footage captured on smartphones and surveillance cameras. Yet those best positioned to crack down on testilying, police chiefs and prosecutors, have done little or nothing to stop it in most of the country. Prosecutors rely on officer testimony, true or not, to secure convictions, and merely acknowledging the problem would require the government to admit that there is almost never real punishment for police perjury.

Officers have a litany of incentives to lie, but there are two especially powerful motivators. First, most evidence obtained from an illegal search may not be used against the defendant at trial under the Fourth Amendment’s exclusionary rule; thus, officers routinely provide false justifications for searching or arresting a civilian. Second, when police break the law, they can (in theory) suffer real consequences, including suspension, dismissal, and civil lawsuits. In many notorious testilying cases, including Parham’s, officers blame the victim for their own violent behavior in a bid to justify disproportionate use of force. And departments will reward officers whose arrests lead to convictions with promotions.