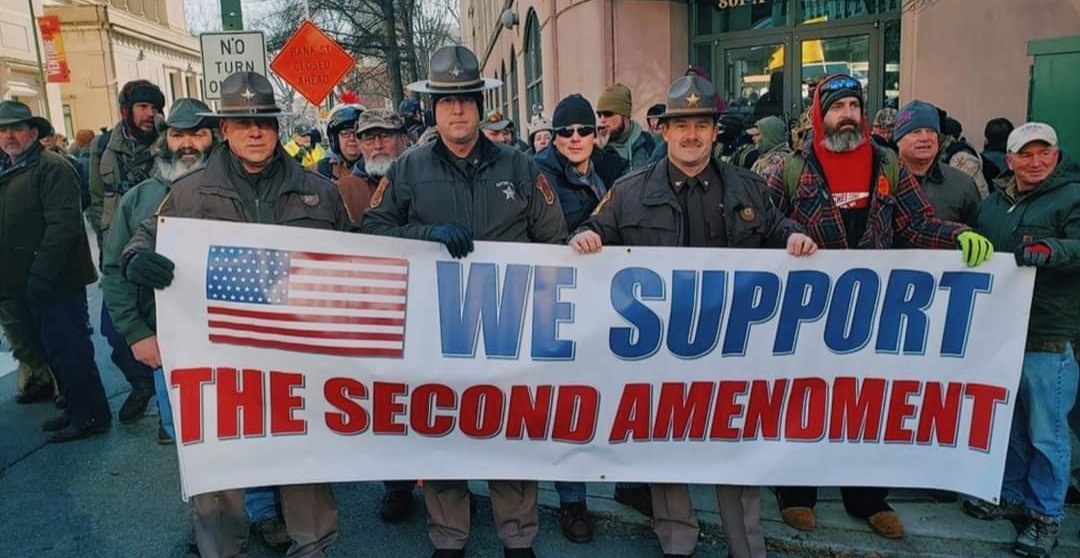 With the 2nd Amendment rally scheduled for Richmond, Virginia’s “Lobby Day” now completed, those who warned against “agent provocateurs,” and other possible hazards, get to breathe a sigh of relief and be thankful for being wrong. The narrative that this was going to be an event dominated by “white supremacists” was proven empirically false by photos that came out showing a racially and politically diverse crowd of people who showed up to communicate to the world that they have one thing in common; their belief that the right to own firearms to protect themselves is a universal idea that only seems to be bemoaned by the most loud and obnoxious “coastal elites” on Twitter, as well as those who believe they are the rulers of the people because they won a popularity contest.

Among the photos that have been circulated from the event is one that shows unidentified law enforcement officers carrying a banner with the American flag on it that includes the words, “We Support the Second Amendment.” To those who closely monitor the State’s enforcement arm, this is a confusing message. The question needs to be asked; do you?

As was discussed in a previous article, the Virginia senate has passed three gun bills that are now being sent to the house for consideration that would see it become one of the most restrictive states in America when it comes to firearms ownership.

Bill SB35, which would “allow localities to ban guns from public events, would actually repeal the current law that restricts localities from enforcing ordinances that would prohibit the purchase, possession, transfer, ownership, carry, storage, or transport of firearms or ammunition.”

Bill SB69 “amends the current law, only allowing Virginia residents to purchase one handgun a month, or in a 30-day period.”

Bill SB70 “requires a background check on all private transfers of firearms.”

If these bills pass the house, and the governor signs them into law (as he has promised he will), will Virginia law enforcement do as their sign claims and support the Second Amendment over their boss’ own mandate? Will they enforce these three bills, the worst of which amounts to a gun registry?

Why is the Second Amendment a Bridge Too Far?

Anyone who has spent any time around groups that promote the “American Gun Culture” has heard the claims from not only law enforcement (they are represented mightily), but from their acolytes that police are defenders of the Constitution and would never enforce gun control laws. “They would quit before they took an American citizen’s God-given right to own firearms!” When you point out occasions where law enforcement has not only shown up to take someone’s guns, but killed them in the process, you’re met with everything from excuses about how that was done in a liberal area, to the inevitable back pedaling about how maybe some people shouldn’t be trusted with guns.

When one points out that they already violate the Constitution by not only trampling over the First Amendment, but especially the Fourth, that’s when the dancing really begins.

The First Amendment to the United States says:

Congress shall make no law respecting an establishment of religion, or prohibiting the free exercise thereof; or abridging the freedom of speech, or of the press; or the right of the people peaceably to assemble, and to petition the Government for a redress of grievances.

That the freedoms of speech and of the press are among the great bulwarks of liberty, and can never be restrained except by despotic governments; that any citizen may freely speak, write, and publish his sentiments on all subjects, being responsible for the abuse of that right; that the General Assembly shall not pass any law abridging the freedom of speech or of the press, nor the right of the people peaceably to assemble, and to petition the government for the redress of grievances.

Both the US and Virginia Constitutions give people the right to “peaceably assemble.” Is that in fact true? According to the ACLU there are conditions upon which one may have to acquire a permit to do just that in Virginia.

Do we need to get a permit? The need for a permit depends on the type and size of event, as well as the locality in which it will be held. Generally, events requiring a permit include: 1) A march or parade that does not stay on the sidewalk and other events that require blocking traffic or street closure; 2) A large rally requiring the use of sound amplifying devices; or 3) A rally at certain designated parks or plazas.

Properly understood, a permit is when the State takes a guaranteed “right” away, and sells it back to you by either requiring a fee, or for you to ask permission from them. At this point your “right” has been transformed into a privilege, something you must ask permission for.

And if you did decide to bypass the “permit” process and declare your rights, who is going to be there to enforce these statutes? No, not the people at the window who take the fee and paperwork you have so dutifully filled out; it will be the law enforcement officer. You will be confronted by a man/woman with a gun and they will stop you from exercising your “rights.”

The Fourth Amendment of the US Constitution reads:

The right of the people to be secure in their persons, houses, papers, and effects, against unreasonable searches and seizures, shall not be violated, and no Warrants shall issue, but upon probable cause, supported by Oath or affirmation, and particularly describing the place to be searched, and the persons or things to be seized.

One need only to go to YouTube and search “traffic stop” videos to know that the Fourth Amendment’s right to be secure in your person and possessions is a thing of the past. An individual’s vehicle, which many states have extended “Castle Doctrine” to, can be rifled through after the officer utters the phrase, “I smell marijuana.” It doesn’t matter if they actually do or not, the courts have interpreted privacy out of existence and local and state law enforcement happily use these phrases to gain access to your private spaces.

The most egregious of these laws is “Civil Asset Forfeiture” in which you do not have to be convicted of a crime, only suspected, and local law enforcement can seize your bank account, home, anything they deem to be part of a criminal “conspiracy” or “drug nexus.” In the event you are found innocent you do not automatically have your property returned to you; you must petition to get it back.

It was determined that in 2014 that the property taken from individuals by law enforcement was greater than all burglaries by criminals combined that year. And law enforcement uses the seized belongings for their benefit.

Many will no doubt applaud Virginia law enforcement for showing up to the January 20th rally to proclaim that they support the Second Amendment. It has been proven that State policy enforcers will enforce gun laws and already do when it comes to the National Firearms Act of 1934, et al. Yet, most fail to consider how they so easily enforce other laws that blatantly violate protected Constitutional rights such as assembly and privacy. One should afford people respect and consideration when it comes to their word but prior action is always a better gauge when taking into account people’s future behavior.