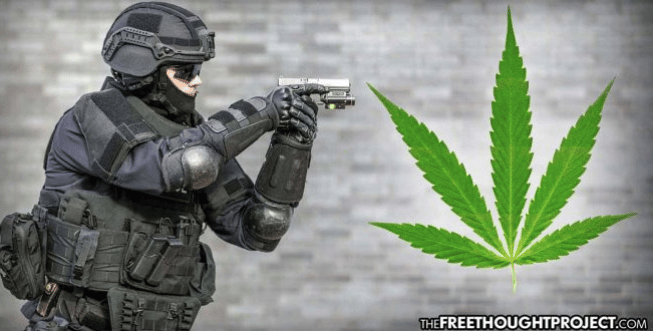 Atlanta, GA — In one of the most revolutionary moves we’ve reported on to date, the Atlanta Police Department announced this week that they are disbanding their narcotics unit so they can fight actual violent crime. This move is both revolutionary and heartening and is another nail in the war on drugs’ coffin.

According to a report from WSB-TV Atlanta, the massive change was confirmed on Tuesday. The department confirmed with WSB-TV reporter, Mark Winne, noting that all the officers in the drug unit will be assigned to other areas.

In a statement, the department told Winne (emphasis added):

“We know that the illegal narcotics trade is often at the center of criminal activity fueled by guns and gangs. The Department is de-centralizing its Narcotics Unit in recognition that the violence that surrounds this trade should be the focus of the entire Department, not just one team. We have had tremendous success at targeting the sale of illegal narcotics by tracking violent criminals and getting illegally-possessed guns off the streets.

“Violent crime and gang activity must be the Department’s primary focus and where we will have a greater impact on the crimes affecting those most often victimized in our communities.”

Imagine that! Instead of focusing their efforts on kicking in doors in the middle of the night over people possessing a plant, Atlanta cops will focus on stopping actual violence against the citizens. This is huge.

Naturally, the cops who make a living kicking in doors and confiscating money, drugs and property from drug dealers with all their expensive militarized gear, are not happy.

“Absolutely, it’s a risky move,” a veteran APD narcotics officer told Winne, asking not to be identified. “I’m sure there was a lot of thought put into it. I don’t have all the numbers that the higher-ups in APD have, but I wouldn’t recommend it.

“I hope in the long run that this move is successful. I wish Atlanta the best. I hope it was well calculated,” the officer told Winne.

Although they still acknowledge the perpetuation of the drug war in no uncertain terms, the fact that officers will now focus on preventing harm rather than attacking people for drugs is monumental. Hopefully, this move catches on and departments across the country follow suit.

As TFTP has reported before, in the land of the free, those tasked with ‘protecting’ society — often and with extreme prejudice — fall far short of providing anything resembling actual safety. Instead, law enforcement in America often chooses profit over people. One particularly egregious example of this choice is the fact that tens of thousands of raids on people for suspected illegal substances take place every year, while hundreds of thousands of rape kits collect dust in police departments across the country and murders continue to go unsolved.

If you were murdered today, there’s only a 60% chance of police catching the person who did it. That number drops to 3% if you’re raped. 50 years ago, that number was much higher. What happened?

The answer to that question can be found by looking at where police — everywhere except Atlanta — allocate much of their time and resources.

This decline is in spite of there being far fewer murders. It is also in spite of new technological developments to help police solve crimes, like DNA testing, advanced forensic labs, and unethical spying devices like the stingray.

Despite the near complete erosion of the constitutional protections against unlawful search and seizure, the clearance rate for murder and violent crimes continued to free fall. This highlights the fact that no matter how many rights are given up or freedoms diminished, police cannot guarantee your safety.

For now, it appears that the Atlanta Police Department is moving in the right direction. Other departments would do well to pay attention.