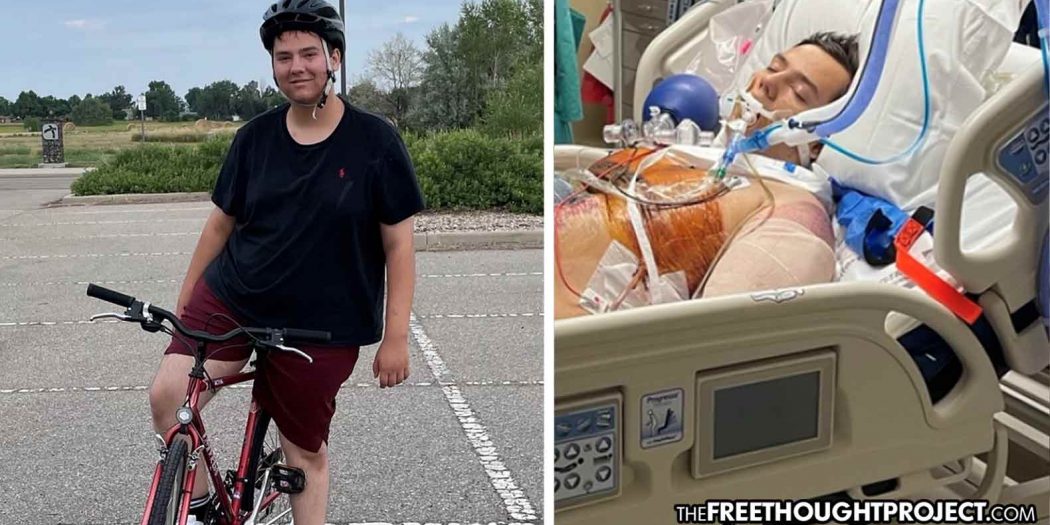 As TFTP reported earlier this year, body camera video showed officers with the Loveland Police Department attack 73-year-old Karen Garner as she walked home from Walmart. The officers neglected to provide aid, and they laughed and celebrated their brutality against an elderly woman with dementia. The video evidence showed that at all levels of the Loveland police department there are sadistic and depraved officers. Now, this same department is in the news once again—this time for shooting and gravely wounding an innocent developmentally delayed teen who needed help.

According to the family of Alexander Domina, he is severely developmentally delayed as a result of years of horrifying abuse during his childhood, which is why he now lives with his grandmother. Mari Newman, an attorney for the family says that Domina, 19, has an IQ of just 62.

“Alex’s grandmother called 911 because he was having a mental health crisis. She was very clear to the 911 dispatcher that he had not hurt anybody, that he could be talked down,” Newman said, according to KDVR. “And then when the officer came, she repeated that it’s a mental health crisis, he can be talked down, and yet a Loveland officer came in, guns a-blazing, and shot this young man three times.”

According to the family, Domina’s grandmother called 911 Monday night and told them Domina was holding a knife in the backyard but that he was not violent, had not hurt anyone, and only needed to be talked down to get mental health help. Unfortunately, however, instead of help he received bullets.

“My goodness, that is something no family member should ever have, where we can’t call 911 without the fear that something horrifying might happen just like this,” Newman said. “Instead of serving and protecting, will actually be the ones that ultimately shoot and maybe even kill an innocent young man.”

Yes, Domina is entirely innocent as holding a knife is not illegal and no officers were attacked or injured during the shooting. This department seemingly showed up looking for a fight where there was not one, but resorted to violence anyway—just like they did with Karen Garner.

“There is absolutely no legal, no moral, no human justification for shooting this innocent young man. He was very clearly in the throes of a mental health crisis,” Newman said. “His grandmother had said time and time again that he could be talked down, but instead of doing what needed to be done, Loveland Police officers did the same thing they did just a few months ago.”

Adding to the insidious nature of shooting a teenager with an IQ of 62—meaning he has the mental acuity of a 10-year-old—is the fact that after they shot him, they wouldn’t let his grandmother near him to help him or even hold his hand. According to Newman, the police officer failed to render aid to Domina as well.

“Unfortunately, instead of treating this family with compassion, the Loveland Police officer who shot Alex wouldn’t provide him with any medical care, wouldn’t even let his grandmother go over and hold his hand as he was crying out, as he was probably dying,” Newman said.

According to KDVR, as of Tuesday night, Domina was listed in serious condition at UCHealth Medical Center of the Rockies in Loveland. Newman said his condition was dire.