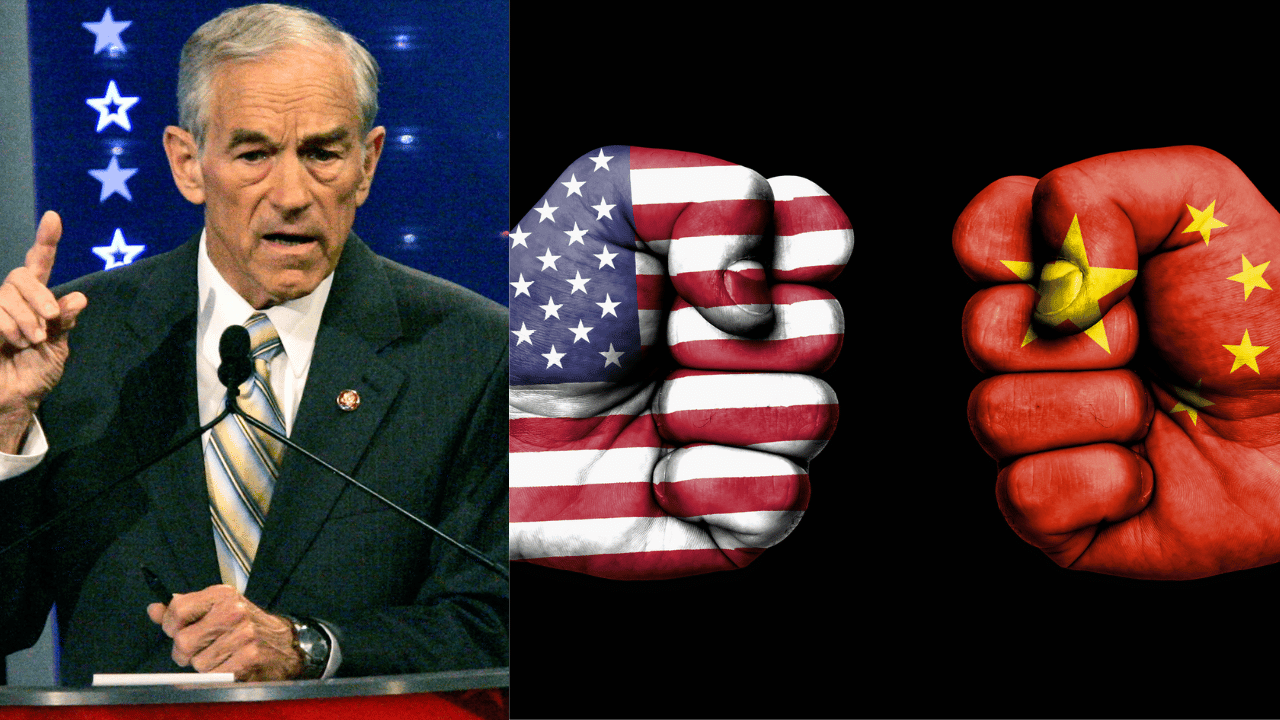 In 2020, when Joe Biden was elected President the American people were told to rejoice, “America is back,” the adults had returned to the room. But did Biden voters know what the incoming administration meant by “America is back?”

Biden has been incessantly stoking war with Russia, China, and Iran. During his first weeks in office, Biden flew a B-52 bomber over the Persian Gulf in an unmistakable message to Tehran, he sailed guided missile destroyers to the Black Sea, sailed a warship through the Strait of Taiwan, and deployed an air craft carrier strike group with several warplanes to the South China Sea. Far from a repudiation of the previous regime, this was a blatant continuation of his predecessor’s polices. These orders could have been given by Donald Trump himself. It was an ominous foreshadowing of the risks Biden’s foreign policy would entail.

It is well known that Democrats love war. As if the Barack Obama years left any doubt, this can be seen with utter clarity given the bloody, anti-Russia proxy war in Ukraine. The party champions this war regardless of the myriad human, economic, financial, moral, and environmental costs.

Indeed, Biden’s Russia policy has consisted of seeking further NATO expansion, leading some of the alliance’s largest war drills since the Cold War era in Eastern Europe, simulating nuclear first strikes with bombers a dozen miles off Russia’s borders, and maintaining a U.S. Naval presence in the Black Sea for 182 days last year.

In 2021, Biden’s administration continued increasing military support to Ukraine while Kiev waged war against its own people. Biden proceeded making Ukraine a de facto NATO state, thereby deliberately crossing the Russians’ “brightest of all redlines” and provoking the current war.

Since the invasion, the White House’s policy has included calls for regime change, sabotaging peace talks, ratcheting nuclear tensions higher than the Cuban Missile Crisis, providing long range artillery rocket systems to be used against Crimea, and waging an unprecedented economic war in spite of substantial blowback. They are tempting omnicide, fighting Vladimir Putin to the last Ukrainian to kneecap and “weaken” Moscow.

Is this what Russiagate-deluded voters bought with the slogan “America is back?”

It should have been obvious when Biden ran that he represented factions which set the stage for the current brinksmanship with Russia and China during the Clinton, Bush II, Obama, and Trump eras. Since Bill Clinton expanded NATO breaking America’s promises not to expand the alliance “one inch eastward” beyond Germany, and launched the illegal war in Kosovo, the Cold War II policies have only been allowed to become more hawkish, never moderated.

The neocons declared the current doctrine in the Pentagon’s 1992 Defense Planning Guidance. They want nothing less than world domination. The liberals agree, while preferring some lip service at least be given to multilateralism, democracy, and the so called rules-based international order. But this is all merely window dressing for American global hegemony and full spectrum dominance.

Biden said he would be relentlessly diplomatic. But he has avoided diplomacy like the plague. He could have stopped the war in Ukraine by agreeing to rescind Kiev’s invitation to join NATO, end the provocative NATO war drills throughout Eastern Europe including on Russian borders (particularly inside Ukraine), support Ukrainian neutrality, back the Minsk accords, and restore the Intermediate-Range Nuclear Forces Treaty. Virtually all of these options, or some version of them, remain available to Biden. Such off ramps are eschewed because they could help end the war.

Not that the MAGA right wants to know, but Biden has vastly escalated the new Cold War with China as well. He has taken the Obama and Trump policies and put them on steroids. Now American troops are openly deployed to the island of Taiwan training local forces for war with mainland China and more high level officials lead delegations traveling to Taipei. Washington is stepping all over the One-China policy which, for decades, kept the peace. Biden continues to make “gaffes” announcing the U.S. is doing away with the One-China policy. He is seemingly committing Americans to Taiwan’s defense while warships sail through the Taiwan strait on a monthly basis. During his first year in office, Biden nearly doubled the number of air craft carrier strike groups deployed to the South China Sea. For the first half of the year, there were almost non-stop deployments of U.S. Navy surveillance ships in the South China Sea. By November, Biden’s military flew more than 2,000 sorties of spy planes in the South China Sea, East China Sea, and Yellow Sea.

Washington’s western allies have earnestly joined in on the Asia Pivot as well. German, French, British, and Canadian warships were sailing these waters in China’s near abroad last year. This year, NATO – the offensive alliance – targeted China in its new Strategic Concept document.

The brutal war in Ukraine, and the accelerated nuclear threat, caused by similar policies has not led U.S. policymakers to rethink China’s encirclement. This month, an American air craft carrier strike group sailed into the South China Sea to conduct more war drills and yet another destroyer transited the Taiwan Strait.

Does this kind of imperial fanaticism make us proud to be Americans? Is this what makes America great?

We are spending more on the Empire today than ever before, well over a trillion dollars per year. As Ron Paul once wrote,

…[H]ow much longer can we afford this unnecessary and counterproductive extravagance?

While our government engages in deficit spending to fund its military exploits overseas, detracting from our own productivity, countries like China are filling the void by expanding their trade opportunities. I have never understood this talk of our military presence as a “strategic reserve of Western civilization.” Instead, the best indication of our civilization has been our prestige in international trade. We should let the best measure of our American greatness come from free and peaceful trade with other nations, not from displays of our military might.

The American people must urgently come to terms with our Empire, its decline, and decide if it’s really worth risking the apocalypse.

If we decide nuclear war and ending all life on Earth is too high a price, then we must reject the whole project described in arch neocon Paul Wolfowitz’s 1992 Defense Planning Guidance. We cannot support any part of it including militarily repressing and containing China’s rise.

There are many issues facing the American people but none more important than this, our entire species is at stake. Libertarians will be tempted to make alliances with people on the right who support these China policies. Some libertarian thought leaders argue it is a necessary measure to collectively oppose some shared domestic enemies. The issue with this calculation should be self-evident and hence why it is not argued that we should ally with left wingers, or indeed self-styled libertarians, who are obsessed with taking on Russia for any other reason. We cannot tolerate nor assist a neoconservative-populist rebrand attempt. We can see this coming with various candidates and lawmakers on the MAGA right.

The fact is Obama launched the Asia Pivot, the largest military buildup since World War II, placing two thirds of all air and naval forces and hundreds of bases in the areas surrounding China.

The “pivot” was led by its key architect Kurt Campbell who is now Biden’s top Asia official on the National Security Council. Campbell is a former CEO at Center for a New American Security (CNAS), a big bank and arms industry funded think tank. CNAS is “funded by the State Department and Pentagon and has taken more money from weapons companies over the last several years than any other think tank in Washington.”

It is also funded by Google, Facebook, Exxon, Microsoft, the Japanese embassy, and Taiwan’s de facto embassy. In May, CNAS actually simulated war with China on Meet the Press.

CNAS CEOs, co-founders, and associates proliferate throughout Biden’s foreign policy team. The Pentagon reaffirmed this year that China is enemy number one. Russia is seconded.

The GOP and many new right figures, in and out of government, are singing and dancing to songs picked by the military-industrial complex and the Democrats. Observe Nancy Pelosi’s Taiwan brinkmanship to see the Democrats still own this coming war with China. Republicans, the junior partners, have been trying to catch up, frantically dancing for Northrop Grumman, Lockheed Martin, Boeing, and Raytheon. We should convince potential conservative recruits to change the music, choose non-intervention, and peace.

We should follow Ron Paul’s example. In the famous 2007 Giuliani moment, Paul was booed by Republicans reluctant to accept they had been lied to by the W. Bush Administration and the media regarding our murderous foreign policy.

He said the September 11th attack was “blowback” from a fight Clinton helped pick by sanctioning and ceaselessly bombing Iraq, for eight years, from U.S. military bases peppered throughout the Arabian Peninsula.

He explained these bases were located on territory Saudi and Egyptian al Qaeda terrorists consider holy land. As a result, our nation paid a price. He asked are we prepared to persist with this hyper-interventionist foreign policy knowing the unnecessary risks? How would we feel if somebody else did this to us?

Paul knew he was neither making friends at Fox News nor on that stage, but he told the truth anyway. He changed the world by changing people’s minds. Had he pulled his punches when it came to foreign policy, many of us would not be fighting for peace, prosperity, and liberty today.

We now know how quickly America’s Cold Wars can heat up. The time for a “No Cold War with Russia and China” message is right now.

Here’s to the next Giuliani Moment.