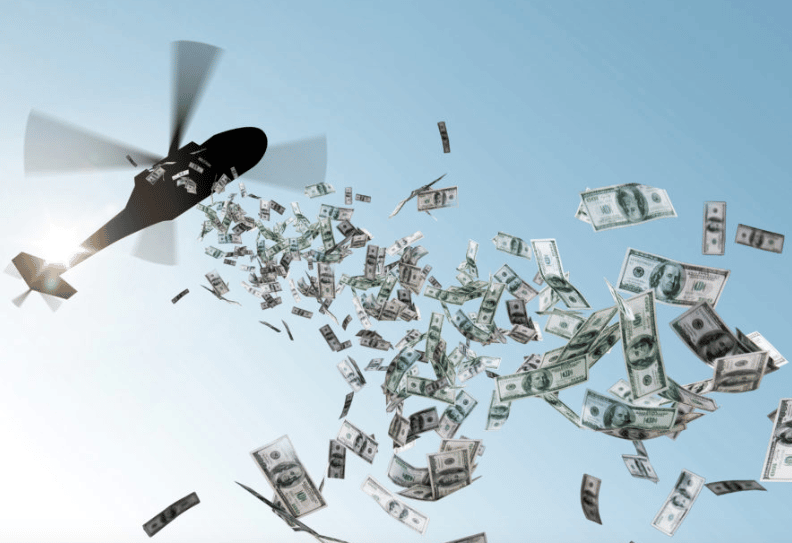 The latest in the Federal government’s response to the coronavirus pandemic is President Trump’s announcement of a “stimulus package” estimated between $850 billion to $1 trillion. The plan reportedly includes $50 to $100 billion bailouts to the airline industry, $200 to $300 billion in small business assistance, and at least half a trillion in “direct payments or tax cuts.”

On that last option, it is further reported that potentially $250 billion would go toward direct payments to citizens, a form of a “rebate check” of sorts. As cnbc.com reported, “Treasury Secretary Steven Mnuchin said earlier Tuesday that the administration wants to get emergency funds in Americans’ pockets ‘immediately.’” Mnuchin added “Americans need cash now. I mean now in the next two weeks.”

There were few details yet available for Trump’s proposal, and it would still need to be negotiated in Congress.  One idea picking up steam, supported by Sen. Mitt Romney and others, is to send every American adult a check for $1,000.

Naturally, that would provide welcome and needed financial relief during very stressful times, and returning stolen money to the people it was stolen from is a good thing.

The notion, however, that the government sending money to people will somehow “stimulate” the economy in this, or any other crisis, is wrongheaded.

We do have some fairly recent precedent for this, specifically the 2008 George W. Bush tax rebates of up to $300 in 2008 at the onset of the Great Recession. As Sheldon Richman wrote at the time, however, “Those checks transferred money from the capital markets to consumers, distorting economic decisions and doing nothing to improve the incentives for wealth creation.”

Applying basic economics to today, mailing government checks will be equally impotent in terms of economic stimulus, if not more so.

For starters, the shock to the economic system is coming from the supply side. Putting government checks into the hands of consumers will do nothing to address the significant hit to production caused by closed factories and companies suffering from high worker absences due to workers staying home.

To the extent that people will spend part of their government check, there will be more money chasing fewer goods and services, the result will be price inflation.

And that artificial price inflation will interfere with the market’s price system that sends important signals to both producers and input suppliers. Increasingly scarce resources should be allowed to flow to those items that are genuinely in highest demand, not propped up by government checks.

Moreover, as Richman alluded to, is the fact that these government checks aren’t manna from heaven. The money must come from somewhere, be it taxes, borrowing or new money printing.

With the federal government running trillion dollar deficits, the rebate checks will need to come from borrowed funds, and the Federal Reserve stands at the ready to monetize this new debt. But the creation of more fiat dollars does not magically put self-quarantining workers back to work.

Instead, it just further erodes the purchasing power of the very same dollars the government will be sending you in the mail. And with more money being diverted into consumers’ hands, there is less money in the capital markets for struggling businesses to borrow to help make payroll and otherwise weather the current storm. As Richman noted, “If the government increases some people’s ability to spend by decreasing other people’s ability to spend, where’s the stimulus?”

Naturally, rising prices will impact low-income, low-skilled people the hardest, because they are least equipped to see their wages rise along with the cost of living.

The government’s policy to mail out checks will not only not stimulate the economy, but in the end may make workers worse off.

END_OF_DOCUMENT_TOKEN_TO_BE_REPLACED

A Dog that Didn’t Bark

Not so long ago we might have been seeing public-service announcements like this: For the duration of the pandemic, please use the internet and your cell phone for essential purposes only. It is imperative that we keep the bandwidth open for emergency use. Thank you...