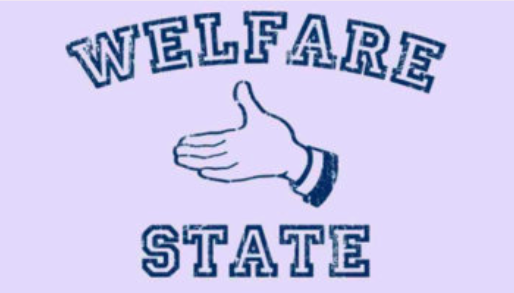 Many non-libertarians will be sympathetic when presented with an argument making the case for the moral superiority of voluntary charity versus government welfare programs.

A mental hurdle they can’t overcome, however, is the concern that absent government programs, private charity wouldn’t be enough to provide adequate care for society’s most needy.

Indeed, this 2014 article in The Atlantic insisted that the voluntary system of charity in place before the state intervened “didn’t work in the first place,” and called a society based on private charity a “fantasy.”

“Only a vigorous public response,” the article concluded, “can ensure our safe passage into a prosperous future.”

But what if it turns out that the government welfare state is not only immoral, but makes poverty worse?

In his 1973 book “The Conquest of Poverty,” Henry Hazlitt wrote that the prevalent idea has become “that the solution to the problem of poverty consists in finding how to expropriate part of the income of those who have earned ‘more than they need’ in order to ‘distribute’ it to those who have not earned enough.”

On the contrary, Hazlitt notes, the “real solution to poverty” consists of “finding how to increase the employment and earning power of the poor.”

Considering Hazlitt’s observation, there are two main reasons why government welfare programs not only fail to reduce poverty, but make it worse.

Finding “causes” of poverty and attempting to address those causes gets things backwards. Poverty is man’s natural state.

As Austrian-school economist and Mises Institute Fellow Per Bylund so succinctly states at the top of his Twitter page, “What causes poverty? Nothing. It’s the original state, the default and starting point. The real question is, What causes prosperity?”

The only means to create wealth and prosperity is through increased per capita productivity, which results from investments in capital funded by real savings. Government welfare programs work against this process.

Paying people not to work will obviously create more people who don’t work. Welfare programs often confront recipients with a “welfare cliff”: that point at which if they take a job, or a higher-paying opportunity, they risk losing government benefits with a greater value than the additional labor income they would receive. Many make the understandable decision to opt for the benefits rather than work.

Conversely, the taxes needed to fund the welfare programs disincentivizes productive activity. As Hazlitt wrote, higher taxes “discourage or confiscate the capital accumulation and investment that would have increased national productivity and real wages.”

Instead of increasing the economy’s productivity, “most of the funds are then dissipated by the government in current consumption expenditures. The long-run effect of such tax rates, of course, is to leave the working poor worse off than they otherwise would have been,” Hazlitt concluded.

In sum, welfare programs may mitigate the financial hardships and consequences of being poor, but they work against the wealth creation needed to actually lift people out of poverty. Moreover, a wealthier society has more resources for compassionate citizens to voluntarily donate to those in need.

“Instances of government relief to the poor can be found from the earliest times. Though the records are vague in important particulars, we do know a good deal about what happened in ancient Rome. A study of that case may enable us to draw a few lessons for our own day,” wrote Hazlitt.

To combat famines and wild fluctuations in wheat prices, ancient Roman leader Gaius Gracchus enacted a program by which the government would distribute grain free or below cost to anyone who would be willing to stand in line once a month. As Hazlitt notes, “Perhaps 50,000 applied at first but the number kept increasing.”

By the time Julius Caesar assumed power a few decades later, the public wheat dole and climbed to roughly 320,000 people, according to Hazlitt.

Such escalations of welfare programs are the norm throughout history, which provides a crystal-clear lesson: “Mass relief, once granted, created a political pressure group that nobody dared to oppose. The long-run tendency of relief was to grow and grow,” Hazlitt wrote.

Fast forward to today’s massive welfare state that has exploded over the past few generations in terms of number of programs, expenditures and recipients for confirmation of Hazlitt’s thesis. A 2015 report from the U.S. Department of Labor estimated that more than one-fifth of Americans participate in at least one major means-tested welfare program per month.

Add in those who receive aide from the countless other smaller welfare programs, along with the army of government bureaucrats employed to administer these programs, and you have a sizeable and powerful voting bloc that no politician dares to cross.

A recent report by the Congressional Research Service estimated that the federal government spends in excess of $1 trillion annually on more than 80 federal means-tested welfare programs; a figure that doesn’t include spending on entitlement programs like Social Security and Medicare which total well over a trillion dollars a year combined.

With the federal government running trillion-dollar annual deficits, how are all these programs paid for?

One way is for the Fed to create trillions of dollars out of thin air.

And new money creation by the Fed disproportionately makes the poor worse off. When the Fed creates new fiat money out of thin air, it isn’t distributed evenly throughout the economy. The wealthy investor class reaps most of the benefits.

Meanwhile, the poor, who lack the bargaining power to raise their wages to keep pace with inflation, and otherwise rely on relatively fixed incomes, suffer the most through the erosion of their purchasing power.

The inevitable proliferation of the very programs ostensibly designed to reduce poverty end up making the poor worse off.

Statists of all stripes insist that government welfare programs are a sign of compassion and an essential tool to reduce poverty.

But actual poverty reduction can only be achieved through wealth creation. If one is truly concerned about raising the living standards of society’s poorest, examine how wealth is created.

Government welfare programs are not only immoral because they involve the initiation of force against peaceful people to fund them, but they also end up hurting the very people its proponents claim to want to help.