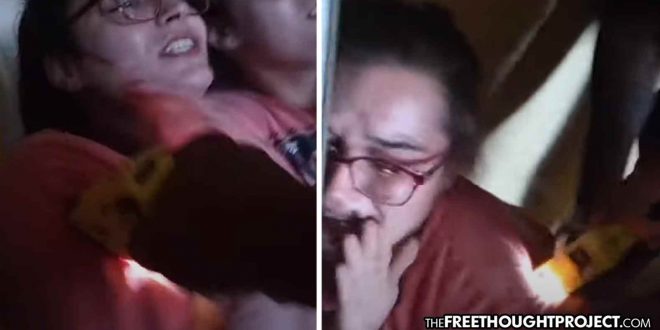 For four months, Officer Leon Davis with the Springfield [Massachusetts] police department escaped accountability for a most disturbing act of using his taser on a pregnant woman—repeatedly—in a sickening attempt to inflict punishment. However, the actions by Davis were too much for the department to sweep under the rug, and this week Davis was arrested and charged for torturing a pregnant woman with his taser.

Luckily for Davis’ victim, 27-year-old Bryonna Parrillo, Springfield officers were recently fitted with body cameras. Had Davis not recorded himself repeatedly tasering a pregnant woman, it would have been Parrillo’s word against his, and we know how that ends up.

The incident unfolded on September 29, after Parrillo made the poor decision to text her boyfriend’s boss threatening messages for firing him.

Police arrived on the eighth floor of the hotel and attempted to get into the room where Parrillo and her boyfriend were staying, per an agreement for out-of-state workers refurbishing the hotel. Instead of immediately letting the officer in, Parrillo attempted to hold the door shut with her hand, so Davis pulled out his taser and shocked her hand.

After he shocked her hand, Parrillo realizes her actions are futile and then lets him in, cowers behind the door and immediately starts apologizing. She is not resisting and poses no threat whatsoever. Despite the pregnant woman completely submitting to the officer, Davis decided it was time to dole out punishment for not immediately opening the door.

“I know. I know. I know. I’m sorry…we just have to get our stuff,” Parrillo says as she curls up and attempts to defend herself from the multiple taser strikes doled out by Davis.

Parrillo is curled up on the floor, begging for Davis to stop—not posing a threat at all—yet Davis continues to shock the pregnant woman.

Even after Parrillo tells Davis she is pregnant, this sadistic cop hits her with another zap.

After being unnecessarily tortured, a pregnant Parrillo is then dragged to her feet and arrested on a charge of disorderly conduct.

As MassLive reports, Davis has been charged with one count each of assault and battery with a dangerous weapon and assault and battery on a pregnant woman. Documents show he not only faces the two felony criminal charges, but that he also blatantly violated department policy, according to a report by a supervisor.

Apparently it is against department policy to taser pregnant women in any situation.

Those violations included “deployment of the device in a punitive or coercive manner; use on a handcuffed or secured prisoner, absent overtly assaultive behavior” and “use of electronic control weapons against…women believed to be pregnant.”

Despite the charges and clear violations, Davis remains employed with the department on administrative leave. They department has not released a statement as to why it took them four months to charge the officer or why he wasn’t put on leave immediately after the incident.

“The evidence shows that this officer’s actions are clearly outside of his training, as they were punitive and grossly excessive, and therefore criminal,” Hampden District Attorney Anthony Gulluni said after announcing charges. “This type of conduct has no place in policing and police officers who engage in abusive and excessive uses of force must be identified and immediately re-trained or fired.”

He continued, “As we have seen here and across the country, this kind of misconduct undermines the trust that the community must have in its police departments and serves to sully and frustrate the work and reputation of the many good police officers who make up the vast majority of those departments.”

We agree. Sadly, it is an all too common occurrence.

“This incident should not be a surprise to anyone. While it might be a shock to the conscience for some, to many of us it is merely a culmination of poor leadership that is too stubborn to realize that they cannot change this police department from the inside out,” said Springfield City Councilor Justin Hurst.