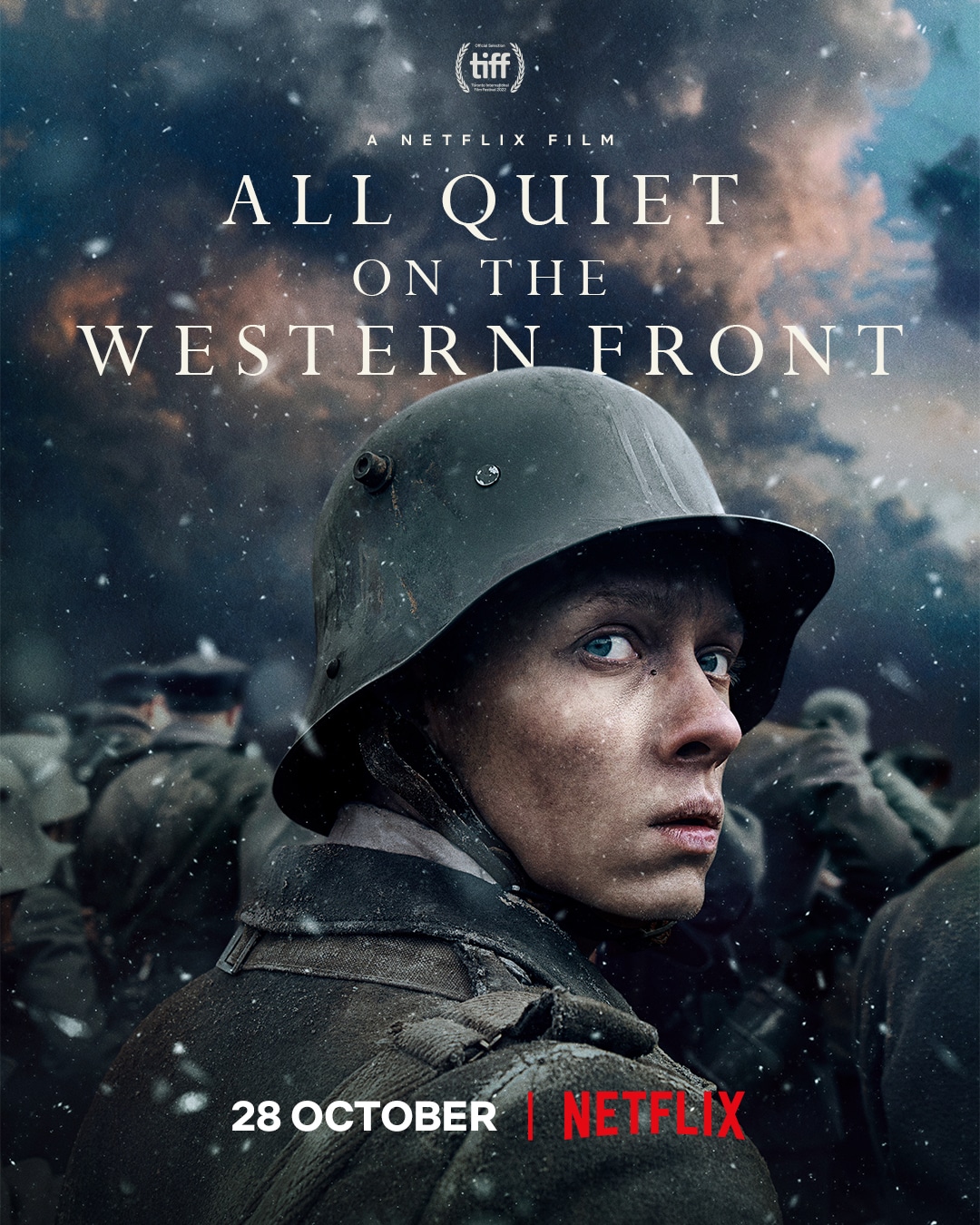 The latest adaption of All Quiet on the Western Front is a German production available on Netflix that gives a grim and gruesome depiction of World War I. Based on the 1929 book by Erich Maria Remarque, and differing in parts from both the book and previous film adaptations, it stands on its own and respects the source material. A sobering account of war and the tragedy of state violence, the film’s perspective is very much anti-war as human characters are treated as inhuman elements in the harsh setting of the Western Front.

Set in 1917, the film focuses on two German soldiers, Paul and “Kat,” with the youthful teenage Paul joining the fight with a willingness and eagerness to serve his nation and win the war swiftly. He only too soon learns that his illusions were part of a mass romantic delusion, finding that war is miserable and frightening. Paul and his fellow youth become but more pieces of meat flicked into the mincer of destruction. The Western Front of the film is muddy, bloody, and exhausting, the war itself the antagonist supported by callous generals and field marshals.

The heartless mechanization of warfare that would define much of the twentieth century is on display in the film, including the reclaiming of dead soldier’s uniforms to have them returned behind the lines, washed, and then repaired so that they may be filled by more bodies; or the collection of tags to record the fallen, thousands of names and birthdays documented with indifference. There is a scarcity of material seemingly more precious than human life, which itself is disposed of with as much regard as one would have for bullets and munitions.

Without spoiling the film’s outcome or providing an actual review in itself, it is in the film’s ability to generate sympathy for the invader that is one of the strengths of the adaptation. In the years since World War II the trauma that the First World War left and the level of bitterness shared between the belligerents is almost forgotten. The Kaiser was the Hitler of his time, at least as far as the Allied propaganda machine would lead you to believe. And the German soldier was a brutal murderer, responsible for raping nuns and slaughtering children.

When Erich Maria Remarque wrote All Quiet on the Western Front in 1929, he no doubt leaned into his experiences of the war. The trauma and humor of the soldier, the hopes and fears, the humanity. It was a story not just relative to the German soldiers that existed in Remarque’s own life or book but for all soldiers who make war possible. Despite certain perspectives of history, the German soldiers were still human beings, men and boys each unique as we understand all people to be. It is easy to view history in the macro, to ignore that the armies of imperialism and government violence are comprised of individual humans. Men like Paul and Kat are likeable even though they are also capable killers trapped in war.

The book and films are anti-war by nature. They do not make for an argument to praise war or to argue a case for any positive utility to be found in it. They reveal war to be a destroyer of the physical and spiritual, the savage and uncaring killer of lives and dreams, Remarque depicts this through his characters and the events of the book as human beings that lose their agency. Millions of individuals sacrificed by a few under the guise of some collective good or because policy requires it. The anti-war nature of the book led to its banning in some European countries during the 1930s, a time and place that could have benefited from a dose of the reality of war.

Paul and Kat could exist in any other war in another uniform. Paul, the seventeen year old, naive and with the tragic innocence of youth, is denied a future beyond the futility of war and military service. Kat is a man who was a shoemaker before the war tore him from his profession to be a soldier. The cast of soldiers around them are also human beings, veteran and boy alike. They could be found in the jungles of Vietnam as American soldiers or even in the twenty-first century as Russians in the Ukraine.

Besides stealing from a farmer, the soldiers in All Quiet on the Western Front commit no atrocities against the civilians, other than the war itself. Imagery from Oliver Stone’s Platoon are not needed to heighten the emotions against war. That does not mean that no atrocities against civilians occurred near the trenches of Paul and Kat. We see surrendering soldiers burned alive by flame throwers and men shot on the spot for expressing dissent. That is (as we are often told) war. In the film it is a horrific and intimate reminder that war is disgusting, free of romantic righteousness.

Sympathy for the characters reveals a willingness in the viewer and reader to connect with another human being. Once we see beyond the uniform of a nation, looking into the eyes of men and boys who serve, we can understand better the futility of war. It is how soccer games emerged in the first Christmas of World War I after all. Humans desire to connect, it is government and laws that spurned hatred, violence and mass death. Felix Kammerer is cast well as Paul, his eyes expressing in the universal language of emotion, whether happy to eat stolen goose or lost in the thousand yard stare, he is relatable and tragic.

The desperate hunger of the soldiers in the trenches is contrasted by the statesmen and military officers, far from the dangers of war as they gorge opulently. Those making the decisions seldom suffer the consequences of them, and words such as honor, pride, and ambition are scoffed out by the obese war masters while the men dying in battle care only about survival. It is a contrast that is shown in the film, the reality of policy.

Beyond the trenches, the film shows the negotiations between German and French delegates that would lead to the armistice on the Western Front. It is decided to be eleventh hour of the eleventh day of the eleventh month, 1918. Human beings have a strange love for symbolic numbers. Those soldiers who would die between the signing of the armistice and the official moment for the war’s end are tragically wasted to satisfy the necrotic religion that statesmen have for such historical monuments.

The moment of war’s end is captured with a surreal harshness, once the announcement is dramatically made that the war is over, nightmare switches to absurd peace. German and French soldiers locked in desperate combat suddenly stop fighting and the dead lay as another prop on the stage of human history. Former belligerents now walk past one another, exhausted by war only now to suffer the fate of coming influenza, hunger, and nightmares. And in another generation, a far deadlier war…

Paul, though young, is a killer. His innocence and charisma as a protagonist are not eroded by the lives that he takes. He does not hesitate to kill (and kill he does with savage purpose). The French soldiers that he kills exist to tell his story. They are humans all the same and men just like him. Paul is a lost boy, not a good German but a heroic one. A generation too young to have an SS badge on his uniform or to be associated with a still pariah ideology, though if he was born later he could just as easily be Guy Sajer’s Forgotten Soldier. Near the end of the film, Paul looks a ghost, skin caked in dried mud and remnants of death, his eyes distant, barely a man, already depleted of living.

War is horrible, and the point of All Quiet on the Western Front is it’s also avoidable. The instant war erupts does not emerge from a singular catalyst. It is not simply because a nationalist kills two elderly monarchs. War is a series of steps that culminates in a tragic impact of death. It is always righteous in the minds of those who push for the violence. In the years after, those who may have survived it or lost loved ones can romance the reasons and importance of the war, that some greater good was found, that the dead sacrificed and were not wasted. It is the romantic illusions about war that leads humanity to fight more of them.

Though now it may be all quiet on the fronts of World War I, in the century since humanity has not learned. War has raged on, millions of men and boys like Paul and Kat have fought and died. With each and every adaptation of the book, new generations will be exposed to the ancient tale of men fighting a futile war for distant masters. Though it is only with the distance of time that we are allowed to sympathize with the invader on an individual level. It is why a Russian soldier in the Ukraine according to Western eyes is not a man or a boy, but instead a uniformed killer. It is such an inhuman perspective that ensures we will always march to war, that boys like Paul will enlist to fight it and men like Kat will be ripped from their lives to die in it.