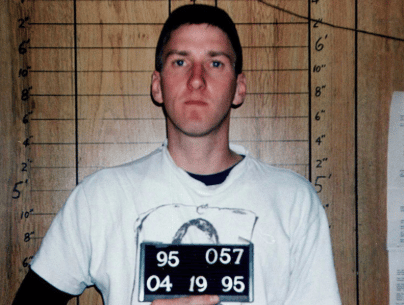 Saturday, April 8th, 1995, Timothy McVeigh and two other men paid a visit to a Tulsa strip club called Lady Godiva’s. The three men were reportedly there for several hours, from around 8 or 9 until around midnight.

The club’s owners were Floyd Radcliffe and his wife, Julie. They had an audio/video security system in the dancer’s prep room and the surveillance system captured a cocktail waitress, Tara, talking to a dancer about her encounter with Timothy McVeigh that very night.

On video, Tara can be overheard telling the dancer all about it:

Owner Floyd Radcliffe, upon discovering the footage, phoned the FBI who showed up a week or two later and confiscated the film. Oklahoma investigative reporter J.D. Cash had begun his investigation of the event before the FBI arrived. Cash made a copy of the security tape before the FBI got it, knowing that once the FBI got their hands on it, it would probably disappear.

Cash provided the tape to Canadian Broadcasting Corporation’s news program ‘The Fifth Estate,’ and together they carried out an investigation, interviewing staff at at the club.

The dancers identified Timothy McVeigh from a photo spread as the tallest of the three men, the one who boasted to the cocktail waitress about April 19th.

One of the other men with McVeigh was identified from a photo spread as Andreas Strassmeir. Strassmeir was described as quiet, but easily identifiable due to his buck teeth and German accent. Owner Julie Radcliffe told journalist Jon Ronson that all “the girls identified Strassmeir. They all did identify that gentleman.”  Strassmeir has denied he was ever at the club, but the witnesses are certain of it: after all, it isn’t every day in Tulsa, Oklahoma that a stripper talks to a man with a German accent. One could say that’s a rarity, and something that might stand out in ones’ memory.

Likewise, the other man with McVeigh was also identified. He was described as the man paying for the drinks that night, flashing a wad of $100 bills and talking a lot to the girls. That man, described as 5’8 – 5’9, 170-180 pounds, muscular, dark hair, brown eyes, tan complexion, in many ways fit the description of the FBI’s ‘John Doe #2’ suspect. One dancer, stage name ‘Cassie’, told Washington Post reporter Peter Carlson that the man looked like the John Doe #2 sketch. Upon seeing the sketch she said “I recognize him; he’s the one who was sitting in a back booth, talking with other girls.” He too was identified out of a photo spread, described by the dancers as “very good looking, but full of himself.” The dancers all picked out a photograph of Michael Brescia, identifying him as the third man, the one who did the most talking.

At the time, Brescia was Andreas Strassmeir’s roommate and a member of a domestic terrorist organization called ‘The Aryan Republican Army’ which had enriched themselves through a spree of 22 midwestern bank robberies from 1994 to 1996–perhaps explaining the unemployed Brescia’s wad of $100 bills.

As of April of 1995, the FBI had not caught on to the group, and none of the members had yet to be arrested for the series of bank robberies that they carried out across the midwest. These robberies were later cited by law enforcement sources in news reports as having possibly financed the April 19th, 1995 Oklahoma City bombing. What’s more, an FBI document unearthed later described the domestic terrorist group, to which Brescia belonged, in interesting terms: the gang was referred to by the FBI as ‘McVeigh and his associates.‘

What’s more, Dale Culpepper, the club’s bouncer, remembers spotting a faded older model Ryder truck in the parking lot with its logo painted over. This was before McVeigh had rented the ‘bomb truck’ (on April 17th) but it aligns with other witness sightings who spotted an older, faded yellow truck at Geary Lake between the 10th and the 13th–later that very week–and again at the Dreamland motel on the 14th, 15th, and Easter Sunday the 16th — all before McVeigh rented the larger 20-foot Ryder truck from Elliott’s body shop on Monday the 17th.

Based on numerous witness sightings, it becomes apparent that more than one Ryder truck was used by the bombing’s perpetrators, although what became of the second truck isn’t clear. What is clear, is that people saw it, and it stood out.  Just like the three men at the club stood out that Saturday in April.

J.D. Cash published a piece about this story on September 15th, 1996, and the CBC aired the results of their investigation on the CBC news program ‘The Fifth Estate’ in the fall of 1996. By that time, one of the dancers who had identified McVeigh had been found dead in her apartment. Dancer Shawntelle Farrens was found dead in Tulsa the week Cash had begun his investigation, her death ruled a suicide by accidental or intentional drug overdose. The other dancers and cocktail waitresses, however, had gone on record: the men seen with Timothy McVeigh that night were Andreas Strassmeir, and his roommate, Michael Brescia.

Both men would later become central figures in investigative reporters’ efforts to track down just who McVeigh’s accomplices might have been. This encounter, just over a week before the bombing, fits into that puzzle and may shed light on who at least two of those accomplices were.

In the 25 years since the bombing, Andreas Strassmeir has fled the country, moving back to Germany. He’s denied knowing McVeigh, or having visited the strip club, but those denials stand in stark contrast to the memories of the witnesses at the club that night. The most Strassmeir is willing to admit is that he once met McVeigh at a gun show. As evidence of this encounter, Strassmeir produced Timothy McVeigh’s Desert Storm uniform. He bought it from McVeigh for a few bucks. The uniform still had the name-patch on it: “MCVEIGH” in bold letters across the chest pocket.

So too has Michael Brescia slipped away. He was arrested in 1997 for his role in the Aryan Republican Army bank robberies.  Brescia cooperated with authorities and was given a comparatively light sentence, serving only five years in prison.

The other members of the bank robbery gang, described by the FBI as ‘McVeigh and his associates’ in an internal memorandum, weren’t so lucky.  One man, Richard Guthrie, was found dead in his prison cell the day after telling reporters he was going to write a book about the gang and speak to a grand jury about it’s activities. Another member of the gang, Pete Langan, is serving a life sentence for his role in the robberies.

If anything, the encounter at Lady Godiva’s serves to illustrate a distinct link between Timothy McVeigh and some rather unsavory characters who deserve scrutiny.

Just what was Timothy McVeigh doing with Michael Brescia and Andreas Strassmeir in April of 1995?

* “The Company They Keep.” The Fifth Estate. The Canadian Broadcasting Company. 22 October 1996. Television.

Re: Strassmeir and Brescia w/ McVeigh:

“they also picked out Michael Brescia and Andreas Strassmeir from a montage of photos” … “Brescia, they recalled, was very good looking, but full of himself. He was the one paying for the drinks and flashing hundred dollar bills.”

* Ridgeway, James. “Beyond McVeigh: What the Feds Won’t Tell You About Oklahoma City.” The Village Voice, 15 May 2001. Print

* “Separatist Admits Role in Robberies.” The Philadelphia Enquirer, 21 May 1997. Print.

* FBI memo describing the Aryan Republican Army as ‘McVeigh and his associates’: FBI Insert E-4206 04 May 1995

Richard Booth is an independent citizen journalist and member of the Constitution First Amendment Press Association (CFAPA). You can find Richard's journalism at The Libertarian Institute, and on his page at Medium.com.