Elijah J. Magnier: Iran And Trump On The Edge Of Abyss

Elijah J. Magnier reports that the Iranians have sent Trump a clear message.

This is unbelievable if true.

According to well-informed sources, Iran rejected a proposal by US intelligence – made via a third party – that Trump be allowed to bomb one, two or three clear objectives, to be chosen by Iran, so that both countries could appear to come out as winners and Trump could save face. Iran categorically rejected the offer and sent its reply: even an attack against an empty sandy beach in Iran would trigger a missile launch against US objectives in the Gulf. 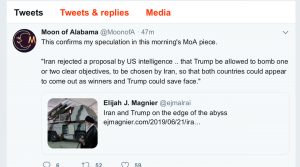 Iran and the US are already at war economically. A way out of this crisis would be for Trump to close his eyes while allowing Europe to work to lift the economic pressure on Iran, without sanctioning the European companies concerned. Otherwise, there may be no escape from a regional and global catastrophe.

Daniel McAdams also mentioned on The Liberty Report that Trump could ease tensions by lifting oil sanctions on a few select countries.

Zachary Christensen is far less than a man. But Judge Curtis Gurley is less than a damned dog. His name is shit forever. His family's honor destroyed permanently. All of human history will remember his disgrace. May he bang his knee on something really really hard and...

END_OF_DOCUMENT_TOKEN_TO_BE_REPLACED

Autistic boy having a temper tantrum. His security force suffocates him to death. No harm. No foul. Government employees can murder whoever they want. That's the law.