Is ‘Equality’ A Worthy Goal?

Is ‘Equality’ A Worthy Goal? 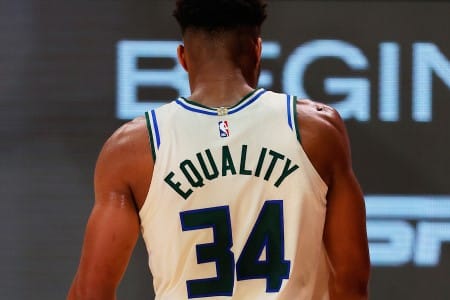 Probably the most frequently used non-COVID buzzword in 2020 was the term “social justice.” You couldn’t escape it. From the George Floyd protests turned riots, even to the world of sports, the notion of social justice and its key component—equality—was everywhere.

I can just imagine the late great Murray Rothbard cringing upon turning on a basketball game only to see the word “equality” emblazoned on the backs of players’ jerseys.

Indeed, one of Rothbard’s most iconic essays was his 1974 tract entitled “Egalitarianism as a revolt against nature.”

Egalitarianism, as defined by Dictionary.com, is the “belief in the equality of all people, especially in political, social, or economic life.” So make no mistake, when Rothbard critiqued egalitarianism he had his sights set on the ‘equality’ being espoused by today’s social justice movement.

Even in 1974, Rothbard had identified the fact that ‘equality’ was a rallying cry of the Left, and that few were willing to challenge the supposed moral superiority of such desires.

“In no area has the Left been granted justice and morality as extensively and almost universally as in its espousal of massive equality. It is rare indeed in the United States to find anyone, especially any intellectual, challenging the beauty and goodness of the egalitarian ideal,” he wrote.

Such broad acceptance led Rothbard to declare that “the goal of equality has for too long been treated uncritically and axiomatically as the ethical ideal,” a problem Rothbard set about fixing in his essay.

So, is equality an ethical idea so morally pure that it is beyond questioning?

Rothbard replied to this query; “If an ethical ideal is inherently ‘impractical,’ that is, if it cannot work in practice, then it is a poor ideal and should be discarded forthwith.”

In short, Rothbard insisted there can be no ethical superiority of a nonsensical goal. If the goal of “equality” cannot work because it violates the very nature of man, it should be summarily dismissed.

For the sake of clarity, Rothbard explains just exactly what ‘equality’ means.

“The term has been much invoked but little analyzed. A and B are ‘equal’ if they are identical to each other with respect to a given attribute,” he explained.

For instance, if two people are both exactly six feet tall, they can be said to be equal in height.

As such, Rothbard continues, “There is one and only one way, then, in which any two people can really be ‘equal’ in the fullest sense: they must be identical in all of their attributes.”

Anyone with the faintest acquaintance with reality, however, realizes that the human species, mankind, “is uniquely characterized by a high degree of variety, diversity, differentiation; in short, inequality,” as he noted.

Rothbard adds, “The age-old record of inequality seems to indicate that this variability and diversity is rooted in the biological nature of man.”

To underscore this point, Rothbard quotes biochemist Roger J. Williams from his 1953 book “Free and Unequal”:

Individuals differ from each other even in the minutest details of anatomy and body chemistry and physics; finger and toe prints; microscopic texture of hair…character of brain waves…- and so on almost ad infinitum.

…it is not only possible but certain that every human being possesses by inheritance an exceedingly complex mosaic, composed of thousands of items, which is distinctive for him alone.

In light of this, Rothbard references the “Iron Law of Oligarchy,” the insight that “in every organization or activity, a few (generally the most able and/or the most interested) will end up as leaders, with the mass of membership filling the ranks of followers.”

Rothbard observed that the egalitarians would respond to these emerging societal hierarchies by insisting that “culture,” and not natural human differences, is to blame for such inequalities.

“Since egalitarians begin with the a priori axiom that all people, and hence all groups of peoples, are uniform and equal, it then follows for them that any and all group differences in status, prestige, or authority in society must be the result of unjust ‘oppression’ and irrational ‘discrimination,’” he noted.

Eliminate the supposed institutions that generate said ‘oppression,’ according to the Left egalitarians, and society will achieve the equality of results that social justice demands. Through this reasoning, the egalitarians have convinced themselves that their goal of equality in society is attainable through the means of changing cultural institutions, such as the market economy and the patriarchy.

What the egalitarians fail to recognize, however, is that the institution responsible for society’s greatest oppression is their chosen tool to create ‘equality’: the state.

To be clear, Rothbard by no means assigns all inequality to the diverse and unique nature of individual humans. He, of all people, has pointed out the oppressive nature of the state, and how it dispenses suffering—and favors—in unequal distributions. Calling out the state’s role in creating injustices is a worthy pursuit.

Where the egalitarians go wrong, according to Rothbard, is in their complete dismissal of human diversity to explain any inequality of outcomes, and their willingness to use unjust means to enforce their ideal of a society comprised of undifferentiated and uniform people.

“At the heart of the egalitarian left,” Rothbard wrote, “is the pathological belief that there is no structure of reality,” and further that the egalitarians believe that the reality of human diversity “can be transformed by mere wish” or “the mere exercise of human will.”

Naturally, to impose this “will” of the egalitarians requires an application of violence and coercion from a powerful ruling elite. “An egalitarian society can only hope to achieve its goals by totalitarian methods of coercion,” Rothbard concluded.

This imposition of forced conformity is “anti-human,” according to Rothbard, and therefore the goal of egalitarianism—or equality—is a “revolt” against the biological reality of our uniqueness.

From this, Rothbard is able to dispense his final verdict: “Since their methodology and their goals deny the very structure of humanity and of the universe, the egalitarians are profoundly antihuman; and, therefore, their ideology and their activities may be set down as profoundly evil as well.”

Bradley Thomas is creator of the website Erasethestate.com and author of the book “Tweeting Liberty: Libertarian Tweets to Smash Statists and Socialists.” He is a libertarian activist who enjoys researching and writing on the freedom philosophy and Austrian economics. Follow him on Twitter, @erasestate.