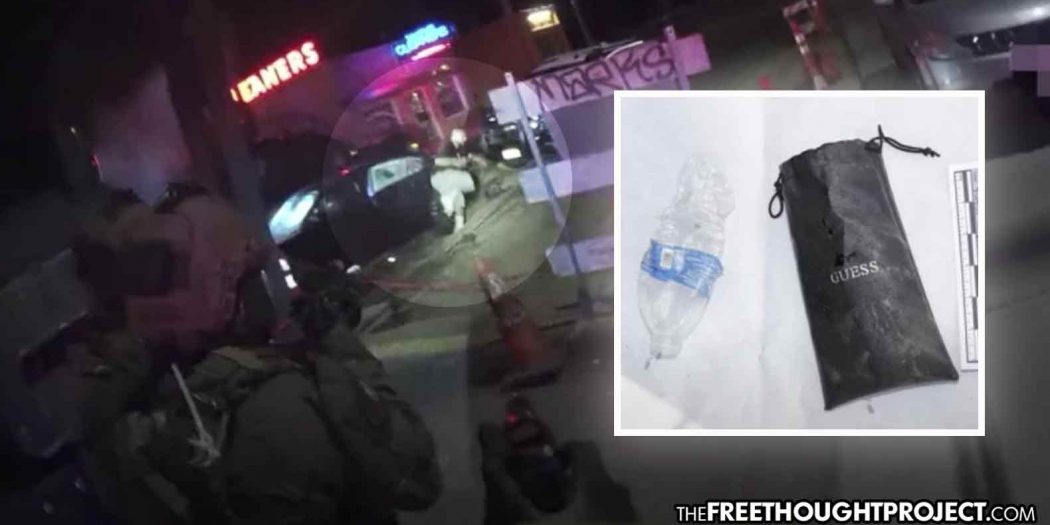 Last September, Brandon Lopez, 33, led police on a chase before crashing his car. He was suspected of driving a stolen vehicle, had several warrants out for his arrest, and was mentally ill. If he actually committed all the crimes of which he was accused, however, Lopez deserved to go to jail. He will not be going to jail anymore though, because police reportedly mistook a water bottle in a bag—for a gun—and killed him.

Lopez is the cousin of Anaheim city Councilman Johnathan Hernandez who says on the night he was killed, Lopez was experiencing a mental health crisis when Anaheim police escalated the situation without reason.

Multiple council members decried the shooting, comparing it to a “firing squad.” Santa Ana Mayor Vicente Sarmiento compared the Anaheim police department to an actual firing squad after saying they made a “provocative decision” to fire flash-bang rounds into Lopez’s car before multiple cops opened fire.

Given that officers Catalin Panov, Kenneth Weber, Paul Delgado and Brett Heitmann all shot Lopez that night, the comparison to a firing squad is indeed accurate.

The incident unfolded on Sept. 28 as Lopez led police on a chase for a half an hour. The chase only stopped when the car Lopez was driving became stuck on tracks being constructed for the O.C. Streetcar.

For several hours police attempted to make Lopez exit the vehicle, but he did not. During the standoff—which wasn’t really a standoff as Lopez was unarmed—Sgt. Jacob Gallacher reported to other officers that Lopez had a gun.

He claimed he saw Lopez reach under the seat and grab that gun and then claimed he was holding it in his right hand.

He had no such gun.

In the video Gallacher explains that officers on the scene decided to shoot tear gas into the car to get him to exit, “with the hopes that it would encourage him to surrender.”

After several hours, tear gas was deployed, and only seconds later Lopez would be dead.

As the body camera footage below shows, Lopez exits the car as police shout “hands up!” and “gun!” There was no gun, and in spite of this fact, all four officers opened fire on Lopez as he ran across the tracks.

Even after he fell to the ground, police pointed out the “black object in his right hand”—which was just a water bottle in a bag — and for good measure they shot him again. This time, they decided to use a less lethal round.

Police were told by the family—during the standoff—that Lopez wanted to die and was trying to commit suicide by cop. They obliged.

“Roughly 30 minutes after both departments were informed by the family that Brandon was experiencing a behavioral health crisis, he was suddenly and violently killed by Anaheim PD,” Jennifer Rojas, policy advocate and organizer with the American Civil Liberties Union of Southern California said. “When SAPD and APD respond with armored vehicles and multiple armed agents and chemical agents and flash-bangs, it just once again illustrates that police are not equipped to respond to people experiencing a mental health crisis.”

For the last two months, Lopez’s family has been attempting to hold the officers who killed him accountable, calling for their arrest. For now, the investigation remains underway.

“As with all critical incident investigations, we withhold judgment and do not draw any conclusions about whether or not our officers acted within our policies and in accordance with the law until after all the facts are known and the investigations are complete,” Anaheim Deputy Chief Rick Armendariz says in the video below.