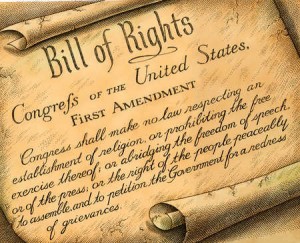 The American antiwar movement has an illustrious history of peacefully highlighting and denouncing the criminality of our country’s military apparatus. From Henry David Thoreau’s tax resistance to the Mexican-American War, to SDS’s protests against the Vietnam War, to the progressive-libertarian marches against the Iraq War, the antiwar movement has long been on the frontlines of efforts to restore (or bring) rectitude to our republic by ending the state-sanctioned practice of mass murder. However, through its First Amendment jurisprudence, the Supreme Court has habitually stymied our efforts to keep the imperial juggernaut in check. One of the cornerstones of this pro-war effort is the Court’s enduring verdict in United States v. O’Brien—a decision that it would behoove a moral court to jettison today.

In 1966, as conflict raged in Vietnam, four young men burned their draft cards outside a Massachusetts courthouse in order to assert their opposition to the escalating war. This, they insisted, amounted to nothing more than the sort of free expression safeguarded by the First Amendment. The Supreme Court begged to differ, putting forth a morally and constitutionally dubious test to justify censoring the young men’s expression.

After finding (predictably) that the anti-burning law served the important governmental interest in an efficient draft, the Court declared that the state’s means (i.e., the law) were adequately tailored to the state’s desired ends (i.e., the smooth efficiency of the draft). Thus, the Court concluded that the war resisters’ speech was not constitutionally protected.

To illustrate, suppose that a conscientious objector withholds the money that she is legally required to pay in taxes to the Pentagon. When the IRS comes banging at her door, the objector insists that the income tax law violates her right to free expression by requiring her to pay for something that she abhors. In response, the IRS argues that the Pentagon needs taxes to function and that the incidental burden that war taxes have on the pacifist’s speech (by forcing the pacifist to cough up money for taxes) is not as bad as a law that directly burdens pacifists’ speech (for example, by prohibiting antiwar protests in public areas).

The Court, invoking O’Brien, would likely side with the IRS and would ask merely whether the tax law serves an important governmental interest. The justification, again, would be that the tax law is not targeting speech, even if the tax law has the side effect of limiting speech.

But when speech is suppressed, either directly or indirectly, it is not enough to ask whether an important governmental interest supports that suppression. Before suppressing speech, the state should be forced to show an interest of the most significant—i.e., “compelling”—variety. Had the Court invoked this latter standard in the 1960s, perhaps draft card burnings would have been declared constitutionally protected. And, today, were our expressive acts of resistance against U.S. imperialism buttressed by the compelling interest test, perhaps those acts would be declared constitutionally protected as well.